Nature is calling: Here’s how to poop properly in the great outdoors

The very first time Matt Misicka went camping in the backcountry, he really stepped in it. That’s right: it. There he was, in the middle of the night, needing to relieve himself. He took his flashlight and trowel and ventured out into the darkness to find a place to squat when, as he got into position, he smelled something. He shined the flashlight down and, right there on the ground, he saw it.

“I was standing in my flip flops in someone else’s stuff,” he recalls with a shudder. Or maybe the shudder is mine as I hear him tell the story. Nothing kills the romance of being out in nature faster than stumbling upon human waste.

As more people make the great outdoors their vacation destination each year, poop-related problems are piling up. The number of visitors to national parks hit an all-time high of more than 330 million in 2016. The math pretty much stinks: Humans produce up to a pound of poop per day and human feces take about a year to biodegrade.

Humans produce up to a pound of poop per day and human feces take about a year to biodegrade.

Thankfully, Misicka—an avid backpacker and president of the Ohio Conservation Federation—has dug deep into just about everything you’ve ever wanted to know (but were too embarrassed to ask) about going number two in the wilderness. He shared his insights at the 10th annual Overland Expo in Flagstaff, Arizona, in May.

“We wanted to alleviate people’s fears of, ‘Oh my god, how do I go to the bathroom in the woods?’” he says of the seminar he led with Tim Hampton, a fellow lifelong outdoorsman. “We talk about our perspective, but back it up with regulations from lots of parks and other sources. Over the last 30 years, I’ve observed the change in park regulations, correlated with increased park visits and an increased awareness of environmental issues.”

In certain parks and forests, officials are dealing with a spike in visitation by instituting camping and hiking permit systems. Mounts Washington and Jefferson in Oregon—where rangers reported coming across human feces more than 1,000 times in 2016—will introduce permits in 2020. In Colorado’s Conundrum Hot Springs, free waste alleviation and gelling (WAG) bags are distributed to backpackers. These sealable bags contain Poo Powder, a NASA-developed super absorbent that turns poop into an inert, odorless gel.

Mount Denali in Alaska, where an estimated 215,000 pounds of poop has been deposited since the 1950s, now requires climbers to carry out their feces. The National Park Service also requires visitors to carry out. Violators risk a federal conviction.

The biggest concern with regard to human feces is the spread of disease. Pooping in the woods might feel like getting back to nature, but if done improperly it can pollute water sources and infect native fauna—not to mention ruin the natural beauty of a place. Giardia, salmonella, E. coli, and even hepatitis can be passed from humans to animals via discarded feces. So, when living (and eliminating) in the backcountry, it’s important to learn to minimize your impact.

Ideally, you want to “leave no trace”—a sentiment with roots in the 1970s, when the general public became involved with environmental awareness movements. It’s now an actual organization—called Leave No Trace Center for Outdoor Ethics—dedicated to educating people on how to preserve wild spaces and reduce human impact. The mostly privately-funded group operates on seven principles, the first of which is to plan ahead and prepare. Preparation is the basis of every successful venture into the great outdoors, and it relates directly to principle number three: dispose of waste properly.

“I like to pick a spot with a nice view. But if it’s a really good spot, chances are the next person will think so, too.”

In most woodsy places, the general rule is to go in a cathole. Start by searching out a spot some 200 feet (or 70 paces) away from the nearest trail, water source, or campsite. Using a plastic trowel, available at most camping stores, dig a hole 6 to 8 inches deep and 4 to 6 inches round. The depth will depend on soil composition and climate, but you want to stay in the soil’s organic layer where plant and animal matter decompose. If you hit bedrock, you’ve gone too far and decomposition won’t happen. Use toilet paper sparingly. One ply, no perfumes or dyes. Use a stick to stir it in with your waste in the hole, then cover it up thoroughly. Leave a stick or rock on top to let future travelers know what lies beneath.

“I like to pick a spot with a nice view,” says Misicka. “But if it’s a really good spot, chances are the next person will think so, too.”

Going number one is more straightforward. Peeing in or near streams is a no-no, but in major watersheds, it’s fine. Misicka also urges you to avoid peeing on plants, especially rare ones, as the salt in urine can harm them. And watch out for patches of vegetation that looks dead; they could simply be dormant.

If camping with a group, you’ll want to disperse your catholes—for obvious reasons. But dispersing is especially important in remote, lesser-traveled areas. In more well-used sites, concentrating your group’s presence over a smaller area can be less impactful. Latrines are generally discouraged, but Misicka says it’s useful to know how to make one, especially if your group is on the larger side. Use your trowel to dig a trench, 5 to 6 feet wide. Pile the soil to one side. As each person goes, have them cover up their business accordingly.

In humid environments, decomposition is quicker. In deserts, the soil contains less organic matter to help poop biodegrade, so your cathole should be shallower. Here it’s best to carry out toilet paper, sealed in a food storage bag. In alpine environments, where organic material is more scarce, it’s best to carry everything out. Other carry-out zones include river canyons and beaches (because of digging children and shifting tides, both of which can move sand). In most places where you have to carry out human waste, like national parks, WAG bags are the standard. The bags are sold at park visitor centers.

“The bags are single use and end up in landfills,” Misicka points out. “So, this is where I disagree, philosophically, with the standard.”

The EPA classifies human waste as toxic so the NPS isn’t taking any chances, but Misicka believes that, surely, letting poop biodegrade is less impactful than adding to landfills. WAG bag manufacturer Cleanwaste, for its part, claims WAG bags biodegrade in most landfills within eight months.

Whether he approves of all the rules or not, Misicka always does his best to follow them. Park rangers are within their rights to check visitors’ gear and even inspect WAG bags if they choose to, but it’s difficult for them to police people in their most private moments. For the most part, rangers and land managers must trust visitors to respect nature. As guests in the wilderness, the very least we can do is not crap all over it. 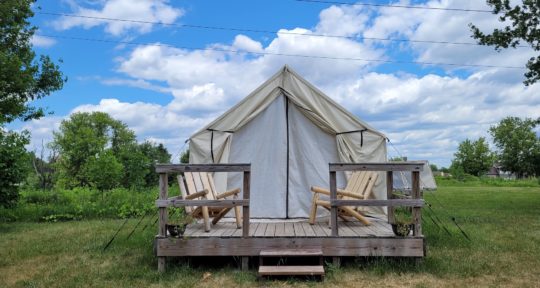