I finished my seasonal contract work as an outdoor guide in the Smoky Mountains of Tennessee. Where to next? I decided to pack up Parker (my van) and make my way out west toward California. I drove I-40, stopping to explore along the way. I spent most of my overnights at truck stops where I had access to a shower every night, one of the daily luxuries missing from Parker.

When most people dream about vanlife they often think of all of the glorious photos they see on Instagram. However, there’s a different side: There are nights when you’re too tired to find that perfect boondocking spot with the amazing view and you pull over at a rest or truck stop for the night. It may not be very glamorous, but it’s safe.

Related: How to find a safe place to park your RV for the night

From horseback riding to red rocks

My first overnight off-grid camp spot was off I-40 west near the town of Claude, Texas. It was located at the top of the mountain with amazing views below. The picnic area had some tables and a small hiking trail. My friend Courtney was headed east on I-40 and we decided to meet and hang out. We woke up early the next morning, watched the sunrise, and made our way to go horseback riding near Amarillo with a tour operator named Cowgirls and Cowboys in the West. The guided tour took us near Palo Duro Canyon, where we learned about the history of the area. The city of Amarillo is a must-stop for anyone looking for adventures in the outdoors.

My next stop on I-40 west was in northeastern Arizona where I visited Petrified Forest National Park. The scenic drive through the park is 28 miles from beginning to end. The forest is more than 200 million years old and has petrified wood that’s been exposed because of erosion. You can stop throughout the park to hike, bike, backpack, or even take a guided tour. I hiked two areas in the park: the Blue Forest Trail and the Agate House Loop. Both were beautiful in different ways. If you visit the park, stop at one of the visitor centers to learn about the history of the park and grab a souvenir.

I decided to take a short detour off the interstate toward Sedona, Arizona. Route 89 was narrow and winding as I descended into the valley. Sedona is a quaint small town full of outdoor opportunities. I wanted to hike the Cathedral Rock Trail but the parking area was full. I didn’t have other plans besides hiking, so I drove a bit on the Red Rock Scenic Byway and found Little Horse Trail. The out-and-back hike was about 3 miles and took me up close to the beautiful red rock mountains. After a short climb, I reached the top and sat for a while, taking in the good vibes nature set before me.

Related: The top things to do on an I-40 road trip

When I got back to the van, I ate lunch and made my way onto I-17 south toward Phoenix, Arizona. A close friend suggested visiting Montezuma Castle National Monument. There’s a historic apartment embedded in the mountain that was once inhabited by Sinagua people. I learned about the history and saw where they built their homes in the sides of the mountain. I also checked the visitor center to see some of the artifacts and pottery collected and preserved, which helped me to understand how people lived during that period.

After a long day of adventure, I drove north back to I-40 west and found a truck stop to grab a shower and settle in for the night. The next morning I drove to my final overnight spot before reaching my destination.

Grateful to sleep under a starry sky

I’m always looking for unique places to sleep and sometimes I get lucky. This particular spot was on public lands, which I enjoy. As I drove on the dirt road I heard everything in the back of my home shifting—another not so fun part of vanlife. After I parked, I set my plants out to get the last bit of sunlight and made one of my favorite meals: chipotle tuna melt tacos with a cup of tea.

The dark sky began to light up and the stars made their appearance. There was no moonrise because of the new moon phase, so I could see plenty of stars and even the Milky Way. What a wonderful way to end a road trip, I thought to myself. The next morning I ate breakfast and drove the remainder of the trip to my family’s house.

I’m grateful to be able to live this alternative lifestyle. I’ve been living out of my van for more than a year, and every day is a great one. I wake up feeling alive and renewed. I’m in awe of the places I’ve visited and the knowledge gained with each location. There are ups and downs, but none of that outweigh the freedom given to me being a Black female nomad. I can’t wait to figure out the next adventure, but until then I hold on to my amazing memories. 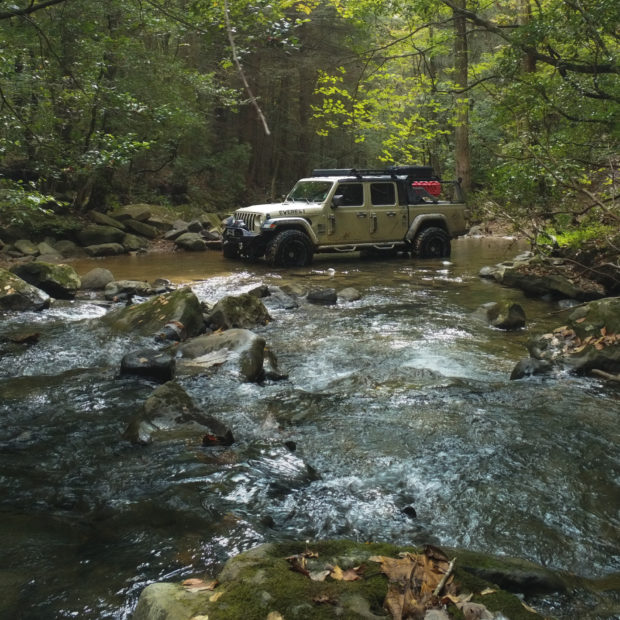