But as one writer found, there’s a surprising exception in the Northeast

It was nearing sunset in the Finger Lakes region of upstate New York. We had been driving for nearly 10 hours, and we were tired, hungry, and ready to set up camp. My husband Kurt navigated our conversion van along the meandering road while I searched for available campgrounds on my phone, cursing each time the signal dropped out. I called the third campground in a row and asked the key question: “Do you allow dogs?”

“Only if you are carrying rabies paperwork,” the camp host replied.

Our dog had a current rabies license on her collar, but we were learning—the hard way—that all campgrounds in the area required a paper certificate in addition to a metal tag. As the last of the day’s sunlight descended below the treeline, we parked in a paved spot next to a walk-in campsite and ate drive-through fast food inside the van with the window shades drawn, hoping that a ranger wouldn’t appear and force us to clear out to the nearest Walmart parking lot for the night.

Kurt and I had no idea we’d run into so much difficulty taking our dog camping. Five years earlier, we adopted River, our 40-lb mixed breed rescue dog, assuming she would fit perfectly into our outdoorsy lifestyle. We’re avid campers, hikers, and kayakers, and River thrived on her first camping trips in southwestern Wisconsin. However, as we began planning camping trips to further destinations, we were shocked to learn that many national parks have strict rules about dogs on trails, restricting pets to developed areas only. While researching a roadtrip to Yellowstone and Glacier, we read that dogs were prohibited from all hiking trails, so we made the difficult choice to leave our dog with a family member while we took our vacation.

The biggest reason we had decided to drive from Chicago to Maine for our next adventure was because we had heard that nearly all of the hiking trails in Acadia National Park were dog-friendly. I didn’t want to take another vacation without River, so we opted to bring her along and deal with any pet-related limitations if and when they arose.

And here on our first night in Upstate New York, we couldn’t find an impromptu campsite in the Finger Lakes since we didn’t have printed immunizations on hand. It was a Saturday, and I couldn’t call our vet’s office back home to request an emailed copy until they reopened on Monday morning. Stuck inside the van in a parking lot, listening to campers in the distance laughing around their campfires, I wondered if we had made a mistake. But when River’s furry body leaned into me, sighing in contentment simply because she was close to her humans, I remembered the reason we had taken the chance in the first place.

Once we crossed the Maine border the following day, our luck changed. The first state park we stopped at welcomed dogs, and from that moment on, we never encountered another issue. We spent a day in coastal Boothbay, eating lobster rolls and drinking bloody marys on the pier while River curled up beneath our table, watching the seagulls. While walking through town, store owners waved us inside to offer River dog treats from bowls kept on their counters.

In Acadia, we found our campsite tucked away in a serene forest. We could hear the crash of ocean waves in the near distance. The 650 miles between our site and the parking lot where we had slept in New York felt more like light-years.

The highlight of our trip was our hike to the top of Cadillac Mountain, the highest point along the North Atlantic seaboard. From our site at the Blackwoods Campground, the South Ridge Trail is a steady climb to the 1,530 summit over 4.2 miles. We began our hike early in the day, and agreed that if at any point it seemed too far or steep to continue with River, we would turn around. Plunging into the thick woods for the first few miles, I felt like we were on the Third Moon of Endor. The fresh scent of pine and saltwater lingered in the breeze, and the warm early autumn sun warmed our skin. Beneath our feet, the path was soft with fir needles and moist earth. At the end of her leash, River leapt and spun in excitement over all of the rocks to climb, the moss to sniff, and the constant attention she received from passing hikers.

The trail climbed gradually, dirt giving way to smooth rock. The South Ridge Trail is an ideal hike for dogs and acrophobics alike; even as we gained elevation, the gentle slope of the mountain around us took away the usual fear I have of heights. On Cadillac Ridge, I wasn’t worried about any of us dropping off the face of the mountain into a rocky ravine.

As we gained elevation, the view of coastal Maine opened into a near 360-degree panorama. We stopped multiple times to take pictures in front of the stunning backdrop of ocean, old growth forest, and sunny sky. Several miles in, River’s tail still wagged fiercely and she danced at the end of her leash, so we kept hiking. After a few hours we reached the top, and gave River extra snacks and belly scratches for climbing her first summit. “What a good dog,” several smiling hikers said as they stopped to pet River and receive her happy cuddles.

After a rest, we began our descent back to camp. I stood back for a moment, watching Kurt and River walk ahead, noting the silhouette of River’s perked ears against the infinite blue sky, the quick, light steps of her paws across the smooth rocks while Kurt’s long-legged pace slowed behind her, allowing her to guide him. I stopped to soak in that moment, grateful for sharing the experience as a family. 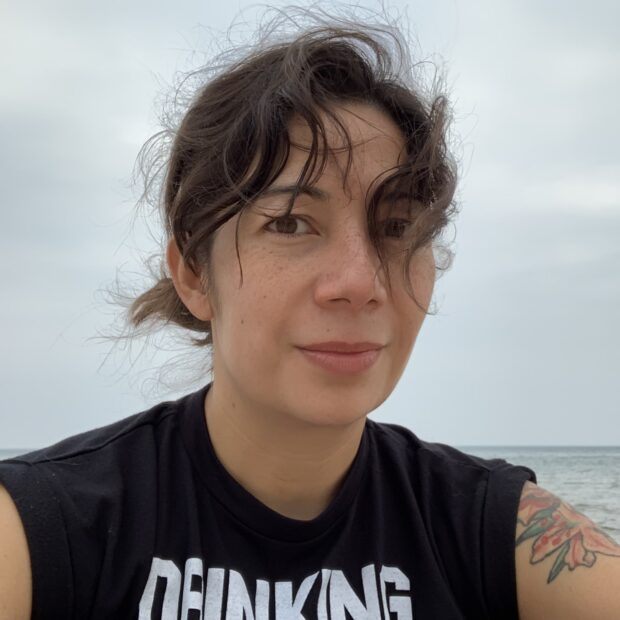 Kim Nelson is a writer, avid traveler, and karaoke enthusiast from Chicago, Illinois. When she isn't driving across the country with her husband and their dog in their conversion van, she loves to camp, hike, and paddle the rivers of the Midwest.