In Taos, a community of ‘voluntary anarchists’ is taking off-the-grid living to the next level

Earthship Biotecture wants to teach you how to live sustainably, one earth-rammed tire at a time

Just a few miles from where New Mexico’s Route 64 crosses the Rio Grande, a collection of alien looking buildings stand out in the otherwise desolate landscape. These houses are built partially into their natural surroundings, each with a wall of windows facing directly south.

While the houses, with their rounded corners and colorful walls made of cans and bottles, may look more like spaceships than human dwellings, the opposite is true: The buildings are even called “earthships.” Located just outside of Taos, this community—known as the Greater World Earthship Community—provides full-time housing to at least 130 people. Under the name Earthship Biotecture, it also hosts an academy in partnership with Western Colorado University, an internship program, and a visitor center open to the public.

Earthship Biotecture is almost completely self-sustainable—and it wants to teach you how to live off the grid, too.

The earthship concept was created in the 1970s by architect Michael Reynolds, who still works and resides in the Taos community. Earthships are built to use natural resources—such as sunlight and rain—and turn them into clean energy. Built with recycled and natural materials, the houses are designed to produce water, electricity, and food for their residents year-round.

“The basic premise of the earthship concept is that we’re looking to sustainably harvest naturally occurring phenomena so that our home will take care of us, versus us going out into the world, juggling jobs we may or may not like, just to come back and take care of a home,” says Adam Baisley, one of the staff members working at Earthship Biotecture’s visitor center. “We all have a million other things we’d rather be doing with our time and if we can get our utilities for free, why should we pay somebody else to give them to us?”

The visitor center is set up inside a typical two-bedroom earthship, and visitors are encouraged to take a self-guided tour to see how it works in practice. The tour starts in the indoor greenhouse. The entire southern wall of the building, which consists of angled floor-to-ceiling windows, is covered in greenery. Plants and vegetables grow from soil in the ground as well as in hanging buckets, and require very little maintenance due to an intricate water harvesting system.

First, rainwater is collected using a cistern on the roof and channeled into a water organizing module, where it’s filtered and fed into the house for consumption. Wastewater from sinks, showers, and washing machines (known as gray water) is sent into an underground botanical cell, where it’s used to water the plants in the indoor greenhouse. The gray water also goes back into the toilets in the house. After it’s flushed, the black water from the toilets is pumped into a septic tank, treated (separating solids from liquids), and then fed to an outdoor garden in the same way the gray water is used to water indoor plants. This means that the harvested water is being used four times—and it’s all fully automated.

Windows on the south side of the house are designed for maximum solar gain during winter and they limit the amount of sun that gets in during summer. Solar panels on the roof create electricity, offering what Baisley calls “sustainable autonomy”—there is no need to pay the government or private companies for utilities.

While earthships can grow fruits and vegetables year-round, most residents are not entirely self-sustainable when it comes to food. “Humans are humans,” Baisley says. “We love our variety and regardless of what somebody says to you, there’s no way they want to eat kale chips every day.”

“This is EVE,” says Baisley as he shows me inside the largest structure on the premise. The two-story building is impressive in size, and has a cathedral-like feel to it. The walls are almost entirely covered with empty bottles and cans, creating a stained-glass effect throughout the building. Massive, arched windows help flood the main room in natural light.

“Depending on who you talk to in the company, anywhere from 25 to 40 percent of the bottles and cans you see here were actually drank by the crew members, the academy students, and the interns themselves,” Baisley says, adding: “Depending how inebriated they are when they talk to you, that number may be subject to change.”

EVE stands for Earthship Village Ecologies. Designed as an “urban housing environment,” it’s made up of five studio apartments that share a communal living space. In 2007, New Mexico Legislature passed the Sustainable Development Testing Site Act, written by Reynolds. It allowed Reynolds and his team to research and test sustainable housing on a 2-acre plot within Earthship Biotecture. EVE is the result, but it was never fully finished.

“Unfortunately, we were given a 5-year permit to build whatever we wanted with no regards to code enforcement or regulations, with the strict requirement that we stop building after that permit expired,” Baisley says.

Today, EVE is used to grow plants and vegetables year-round. It’s the only building in the community that faces southwest instead of directly south, in an effort to pick up the most light from sunsets. And it seems to be working: The plants inside are thriving, despite the fact that the windows are made with marine-grade plastic instead of glass. “This is what you would find in boats,” Baisley says.

The residents of the Greater Earthship Community represent different demographics and socioeconomic backgrounds. What they have in common is a passion for sustainability and autonomy.

“The majority of people here, I’ve found, are in some way, shape, or form voluntary anarchists,” Baisley says. “Not the kind throwing Molotov cocktails—the people here are really friendly, they just don’t want to be forced to participate in systems that they see as corrupt or amoral.”

Many of the homes in the community were built as educational opportunities for Earthship Biotecture’s interns and academy students, and consequently, a typical build could take up to 2 years. “Although, if you have the money and you’ve got a hole in your pocket ready to burn, the company can build a three-bedroom home from start to finish in 2 months,” Baisley says.

For those looking to try out earthship living, the opportunities are endless. You could build your own or hire Earthship Biotecture to build it for you. A small, simple “survival dome” can be constructed for 2,000 dollars or less. For a half-million dollars, Baisley says, you get a “very spacious, luxurious, opulently built showcase home.” And there’s everything in between.

The bulk of the home is built using rammed-earth tires—that is, discarded automobile tires filled with compacted soil. This technique creates dense walls that naturally regulate the home’s interior temperature. Recycled cans and bottles are used for structure as well as for aesthetic purposes.

If you’re not quite ready to commit yet, Earthship Biotecture also offers nightly rentals in one of its existing earthships.

While life seems to move a little slower in the Greater Earthship Community—no one here needs to work long hours simply to afford living—there is a sense of urgency that permeates the Biotechture’s mission. Earthships are presented as a way to reduce the need for fossil fuels and combat global warming. And the world is catching on—there are currently earthships in South Africa, Australia, Argentina, Guatemala, and several countries across Europe, among others.

“The analogy that Michael likes to use is that humanity is the Titanic,” Baisley says. “We’ve already hit the iceberg and it’s just a matter of getting into the lifeboats. Conveniently, the earthship is the lifeboat.”

The Earthship Biotecture visitor center is open every day except Thanksgiving, Christmas, and New Year’s Day. A self-guided tour is $8 per person, no reservations needed. Guided tours ($20) can be scheduled online. 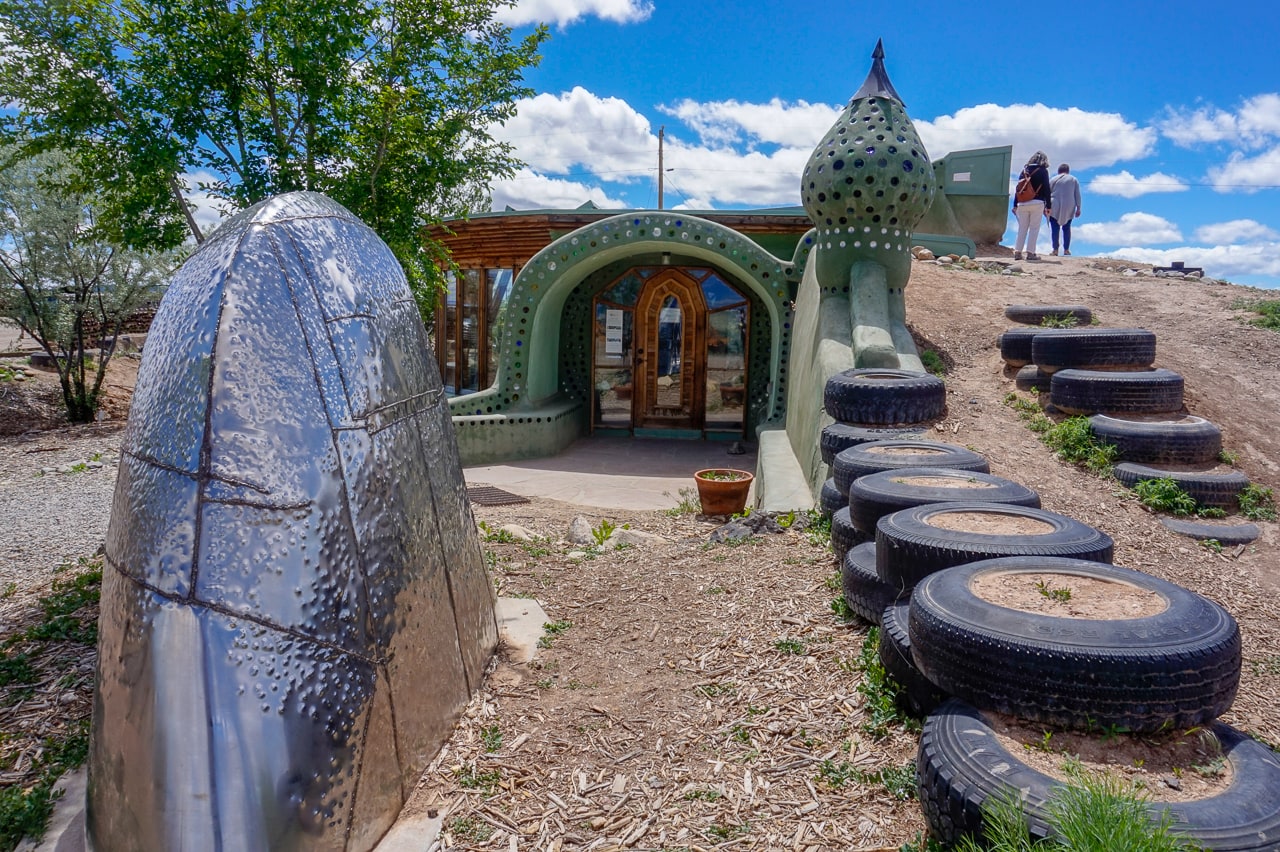