Thanks to the Karen Wellington Foundation, Ann Brinkley not only got to laugh her way through Key West, she got to pass on her unique experience to another cancer survivor as well

When Ann Brinkley travels, she takes a photo of everything that feels like a happy memory. Scrolling through an album filled with snapshots of new places and friends brings back all the warm-and-fuzzy feelings in an instant. So, it was no surprise that Brinkley grabbed her phone to commemorate the moment when she and her best friend got locked out of a luxury condo in a downpour on their first day in Key West, Florida. They were laughing so hard they cried.

“Five degrees between us and we couldn’t figure out how to get in the condo,” says Brinkley, an elementary school principal in Cincinnati, Ohio. “It was the funniest thing ever.”

Brinkley wasn’t about to let a minor hitch bring down the mood. After all, she’d just survived breast cancer and was in Key West to celebrate with Toni Gissendanner, her longtime bestie. The trip had been gifted to her by the Karen Wellington Foundation, a nonprofit organization that sends those who have been diagnosed with cancer on trips with their family and friends. The organization’s only request? “Have fun,” Brinkley shares.

“They’re so serious about it, that when you’re gifted your trip, it’s a big production,” adds Brinkley, who was diagnosed with breast cancer in early 2018 and underwent both a lumpectomy and multiple rounds of radiation. “They want you to take a moment and not think about treatment and what you’re going through. On the memo line of the check they gave me for spending money it said: ‘For fun only!’”

No alarm, no problem

Asking Brinkley to have a good time is hardly a tall order. She and Gissendanner came prepared. “Toni bought us two flasks,” says Brinkley. “Mine was pink with white stripes. I couldn’t drink at all during treatment so I figured I would save it for my vacation. We knew we wanted to start each day with mimosas. And then we discovered Wet Willie’s on Duval Street.”

At Wet Willie’s—the chain liquor store famous for its boozy frozen to-go drinks—Brinkley and Gissendanner each found a favorite flavor and carried their reusable cups and koozies with them as they strolled around Key West (Brinkley took a photo of the drink menu, naturally).

“We spent a day walking up and down Duval Street, peeking into places,” Brinkley recalls. “We did the trolley tour that takes you all around. We did a sunset cruise champagne boat tour. We went to gift shops and restaurants. We watched the chickens that just roam around Key West. We ate Key lime pie. I couldn’t convince Toni to jet ski. We didn’t have plans. We’d just wander. We did anything we wanted to do!”

For Brinkley, that included a lot of rest and relaxation—something she’d never really experienced on a vacation before. “We were always so go-go-go on our other trips,” she says. Even though she had wrapped up treatment before her Key West adventure, the radiation was still working in her body. “One day we were reading in the living room of the condo and both just dozed off. We didn’t set an alarm clock the entire trip.”

“It allows women to have a moment in time where they’re not worried about being sick. It takes all that away for a moment. It allows you to just be.”

The condo—located right on the water close to where the cruise ships dock and minutes from bustling Mallory Square—had a fully stocked kitchen and two comfortable bedrooms, each leading out to a spacious patio featuring chaise lounges, a grill, and a view of the pool. Brinkley’s bathroom even boasted a Jacuzzi tub. “We thought, ‘Oh my God, this is how you vacation!’” Brinkley says.

One afternoon, the duo sat for henna tattoos. “I got three,” says Brinkley. “A flower on my leg, a heart with the word ‘love’ on my chest, and the guy did a free tattoo of a breast cancer ribbon on my arm for me.” Brinkley now has a real tattoo inspired by her henna ones. Drawn by a former student, the tattoo features a flower surrounded by a breast cancer ribbon—a permanent reminder of beating cancer and taking the best trip (so far) of her life.

A moment in time

Creating lasting memories is one of the most important goals of the Karen Wellington Foundation (KWF), which was founded in 2007 to celebrate its namesake, who passed away at the age of 40 after fighting breast cancer for a decade. Karen adored traveling with her husband, Kent, and two children, Robby and Angeline. While she was sick, Karen told Kent that she’d like to send another family going through the same thing on a trip like the ones they took.

Since its launch, the Cincinnati-based organization—which includes 11 chapters nationwide—has organized day outings and vacation getaways for hundreds of women with breast cancer, all aided by donors who give airline miles and time at condos like the one Brinkley stayed at in Key West. KWF accepts nominations of women living in chapter cities and currently has a waiting list of more than 100 names.

Brinkley, who was nominated by her brother, says the foundation fills a unique need: “Donors are generous because they believe in the cause. It’s different from funding cancer research. You don’t realize you need it until you need it. It allows women to have a moment in time where they’re not worried about being sick. It takes all that away for a moment. It allows you to just be. I was so grateful for that.”

As a member of KWF’s Recipient Ambassador Board, Brinkley has remained active with the foundation, speaking to sponsors and volunteering at fundraisers. For her 50th birthday celebration this August, she’s asking for donations, not gifts. “Being involved with the foundation is a whole new sisterhood,” she says.

Not long after her own vacation, she had an opportunity to present a Key West trip to a woman named Linda, who would be staying at the same condo. “We brought her a souvenir and showed her photos and offered lots of tips on where to go and what to do,” says Brinkley. “We told her about Mallory Square and the liquor store concierge who has coupons for all the local restaurants. And, of course, we explained to her how to open the condo’s front door so she wouldn’t have to waste a single moment!” 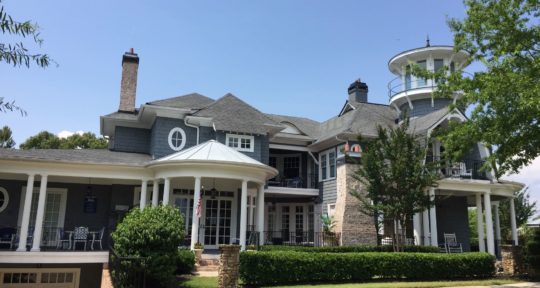