Covering 12 states and 3,700 miles, the Great American Rail-Trail will be the first ever cross-country hiking and biking trail

The urge to travel elsewhere is not a new sensation. From our earliest ancestors, who traversed continents on foot, to the American pioneers, who wagoned west in hopes of finding better land, to modern-day frequent fliers, who repeatedly make their own pilgrimages, 35,000 feet up in the air, covering massive expanses of land seems to be a fundamental part of the human psyche.

John Steinbeck wrote in Travels with Charley in Search of America: “Once I traveled about the country in an old bakery wagon. I stopped where people stopped or gathered, I listened and looked and felt, and in the process had a picture of my country the accuracy of which was impaired only by my own shortcomings.”

Our far-reaching, cross-country travels give us opportunities to see the small details that make up the entire fabric of our country. And I’m willing to bet that there are few places where this is more pertinent than along the Great American Rail-Trail.

Founded in 1986 by Peter Harnik and David Burwell, the Rails-to-Trails Conservancy (RTC) is an American nonprofit dedicated to turning former railroad lines into public trails. Since the 1930s—when train usage began to decline and automobiles became the preferred method of transportation—the number of abandoned railroad corridors has steadily increased. Today, it is estimated that there are thousands of miles of unused railroad tracks across the U.S.

After learning about these forgotten tracks, Harnik and Burwell not only saw potential in the railroads, but in the towns and communities that surrounded them. By founding RTC, the two men aimed to both preserve more green space and facilitate a sense of community by connecting the country through a large network of public trails.

“Our founders had a great belief that if this rail trail movement really took off, one day there would be an opportunity to connect them all,” says Liz Thorstensen, vice president of trail development at RTC.

And it did take off: Since its foundation, RTC has facilitated more than 20,000 miles of rail trails, with an additional 8,000 miles currently in the process of being added. With so much ground covered, RTC decided it could finally move forward with its ultimate goal: connecting the rail trails into one, continuous mega trail.

And, with that, the Great American Rail-Trail was born.

Announced on May 8, 2019, the Great American Rail-Trail will span 12 states, from Washington D.C. to Washington state, covering more than 3,700 miles—1,900 of which are existing rail trails.

“We track all the rail trail mileage numbers across the country every quarter,” says Thorstensen. “And the numbers were becoming very compelling. So we started to study them more closely and the route kind of presented itself.”

The Great American Rail-Trail is currently 52 percent complete. Most of the 12 states have either existing or planned trails slated for development in the next few years. However, mountainous terrain and a lack of existing infrastructure often make it difficult for the RTC to find safe trails in some western states, including Wyoming and Montana.

“While the entire route won’t be made up of rail trails, it all will be multi-use trail, which means users can either go by foot or by bike,” Thorstensen tells me. “But throughout the whole route, the main thing we want to preserve is the rail trail experience. Rail trails tend to be more flat and, therefore, accessible to a really large age range.”

To help maintain the rail trail experience, Thorstensen and her team are meeting with local RTC volunteers and park rangers in the more “geographically challenging” areas to figure out what the best options are and where the easiest connecting trails could be.

“This is the same issue the pioneers faced when they went west,” she says with a laugh. “It’s not going to be perfectly flat the entire way but we’re maximizing the rail trail experience as much as possible.”

The many parts that make a whole

Geography aside, Thorstensen and other members of RTC strategically chose to route the Great American Rail-Trail through cities and towns that could serve to benefit from an increase in tourism and economic boost provided by the trail.

“One of the criteria we set when we were doing the route assessment was that this project wasn’t just about getting from A to B,” says Thorstensen. “This would serve as a catalyst for economic development at the local level.”

Affectionately referred to as “trail towns,” RTC is working with select small towns and cities along the route to implement processes and trainings that will help them welcome trail users and establish services that cater to their needs.

“I think there’s an element of romanticism about the Great American Rail-Trail as a whole that captures people’s attention, which is exciting,” says Thorstensen. “But that puts the spotlight back on all the local trails that comprise it. It’s these smaller trails that really make it so special.”

In a way, this cross-country trail feels like a metaphor for the entire country. America is so much more than New York City or Los Angeles—it comprises thousands of cities and towns in between, and only by passing through it are we able to rediscover what truly makes it whole.

Finding and establishing new trails takes time, and Thorstensen and her team hope the Great American Rail-Trail will be completed within the next few decades. But she’s quick to remind me that people can start enjoying parts of the trail right now.

“There are currently 130 open trail segments along the route that people can enjoy right now,” says Thorstensen. “We hear from people on a daily basis about how they’ve already gone out and hiked part of it. It’s inspiring, the idea of being able to go across the whole country on a protected trail. It connects people.”

To experience one of 130 open trails, or to find a rail trail near you, visit www.traillink.com. You can also use the map below to follow a similar route by car. 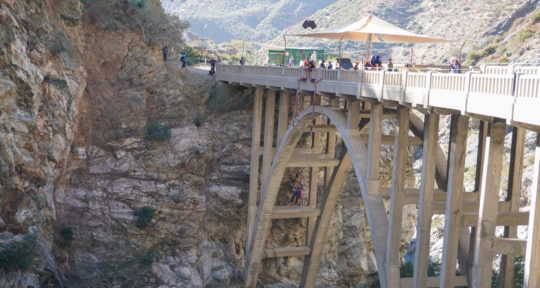 Bungee jumping off the Bridge to Nowhere is a full-day adventure, not for the faint of heart