Built in 1886, the Crescent Hotel is a favorite for paranormal enthusiasts for its spooky reputation

The back porch and balcony of the Crescent Hotel. | Photo: Shutterstock

“What is that?” my friend hisses in the dark, sitting straight up in the springy rollaway bed we’re sharing in a hotel basement that once housed a makeshift morgue. “Do you hear that?”

All around us, someone—or something—is knocking on the walls. We hold our breath for a moment, and hear it again.

Welcome to the Crescent Hotel, considered to be one of the most haunted hotels in the U.S. Nestled within the verdant and lush rolling Ozark Mountains in Eureka Springs, Arkansas, the Crescent Hotel lures not only ghost hunters, but also those looking for a historical (and luxurious) place to stay the night. Even if you never actually get to sleep.

Built in 1886, the Crescent Hotel is a favorite for paranormal enthusiasts for its spooky reputation—but it also offers family-friendly activities and views so pretty that even the prospect of seeing a ghost (or several) doesn’t keep people away.

Over the past century, the hotel has reinvented itself several times; during one particularly dark period, it operated as a hospital whose proprietor peddled dubious “cures” for cancer. Next to the former autopsy room that we chose as our bedroom for the night sits dozens of little jars with mysterious contents. Those containing specimens (including tumors and other medical anomalies) are safely locked in a metal cabinet—but just knowing they’re there makes my skin crawl.

We close and lock the door to the meat locker—where kitchen staff once kept frozen animal carcasses—and sprinkle salt around our bed, a tip from a witchy friend who said it would help repel evil spirits.

The Crescent Hotel, like Eureka Springs itself, has a long—and sometimes sordid—history. Originally the ancestral lands of the Osage Nation and the Delaware and Shawnee peoples, the region’s hot springs are revered for their supposed healing powers. In the 1850s, Dr. Alva Jackson visited the area on a hunting trip with his teenage son, who suffered from a condition known as granulated eyelids. After the elder Jackson advised his son to use spring water to wash his eyes—and the boy was “miraculously healed”—the two began bottling the water and selling it to surrounding communities as “Dr. Jackson’s Eye Tonic.” After the Civil War, Dr. Jackson built a makeshift hospital and used the spring water to treat soldiers passing through. After he treated an influential local judge, word spread.

By 1880, the town was inundated with people seeking cures for various ailments. The Eureka Springs Improvement Company built the Crescent Hotel between 1884 and 1886 at a cost of $294,000 (almost $8 million today). “When we first opened, we were the most luxurious establishment west of the Mississippi,” says Gina Rambo, the hotel’s publicist.

For the first two decades, the hotel operated as a private club. Then, between 1908 and 1934, it was home to the Crescent College and Conservatory for Young Ladies. One of the students asked for her family to mail her Ouija board. “Even way back in the day, the young ladies believed they were in contact with spirits here in the building,” says Belladonna, one of the hotel’s ghost tour curators. “I think it is a pretty great indication that we’ve had some weird stuff going on here for quite a long time.”

The Great Depression took a toll on Eureka Springs, and the women’s college shut its doors. In the 1930s, the Crescent was purchased by its most infamous owner, Norman Baker—and that’s when things really started to get weird.

Baker, a radio broadcaster and inventor of the Tangley Automatic Air Calliope, was already a multimillionaire when he purchased the hotel. He began peddling an injectable, non-surgical “cure” for cancer—a combination of ground-up watermelon seeds, corn silk, clover, water, glycerin, peppermint, and traces of carbolic acid—which he called “Secret Formula Number 5.” The formula did not work, but that didn’t stop Baker from housing hundreds of hopeful patients in the Crescent, even locking those who became too vocal with their skepticism in the “asylum” wing.

When one of Baker’s wards died, they were secretly taken to the morgue in the middle of the night; today, visitors claim to hear the sound of a gurney rolling on the wooden floors or report seeing the full-body apparition of a nurse.

In the late 1930s, Baker went to prison for mail fraud; the Crescent stayed empty until the late 1940s, when the property reopened as a luxury resort. But years of neglect followed, including a fire in the 1960s, and took its toll on the grand hotel. By the 1990s, it was once again in rough shape. After purchasing the nearby Basin Park Hotel, Marty and Elise Roenigk acquired the Crescent too (for $1.3 million), and embarked on a 6-year renovation. The building was listed on the National Register of Historic Places in 2016.

“We were very lucky when Marty and Elise Roenigk came to town,” Rambo says. “They were the folks brave enough to start ghost tours here.”

Several ghosts are said to walk the halls of the Crescent Hotel, but most of the hauntings are friendly. When the Crescent was a college, the son of the school’s president, 4-year-old Clifton “Breckie” Breckinridge Thompson, died of complications from appendicitis. Today, he’s said to still bounce his ball in the hallways. “The second floor is his favorite hangout,” Belladonna says. “He wants to be where the kids are. When kids see him, they believe he’s another living child. They say ‘He lives here. He’s got curly blonde hair, he was wearing weird clothes, and he played ball with me.'”

Room 218 has the Crescent Hotel’s most well-known ghost: a 17-year-old Irish stonemason named Michael, who helped construct the hotel in the 1880s. Known as handsome and flirtatious, Michael reportedly leaned over too far to catch the attention of a pretty girl and fell to his death. “We believe he’s been here the longest,” said Belladonna. “Some of his favorite activities are flipping the lights on and off, knocking on the headboard while guests are in the bed, tying the curtains and towels into knots, and unlocking the balcony doors and swinging them open dramatically.”

Morris, a big orange tabby cat, was known as the hotel’s “general manager” in the 1970s; when he passed on, more than 80 people attended his burial. Today, guests say they can still feel Morris rubbing up against their legs. Dr. John Freemont Ellis, the hotel’s in-house doctor in the late 19th century, is most often seen (or guests catch a whiff of his cherry pipe tobacco) near his former office, now room 212.

The morgue and autopsy room, however, attracts a slightly more sinister crowd. Visitors can see the basement on nightly ghost tours, but rarely do people opt to sleep in the harsh and unforgiving space. Despite dozens of photos capturing unexplained phenomena, we don’t experience anything paranormal—until the knocking starts. We consider fleeing to return to our more comfortable room upstairs, but decide to stick it out until morning.

“There has been quite an uptick in activity in the morgue,” says Debra, a ghost tour manager. In 2019, a certified archeological dig at the hotel unearthed hundreds of bottles of Baker’s “secret formula” as well as jars containing his nefariously-acquired medical specimens. “I think we have stirred things up a bit,” Debra says.

Despite the rapping, during our time spent attempting to sleep in the morgue, we don’t see any ghosts. But when we return to our room in the morning, the space smells of cherry pipe tobacco.

“Dr. Ellis was here,” we exclaim in unison. More haunted hotels across the U.S. 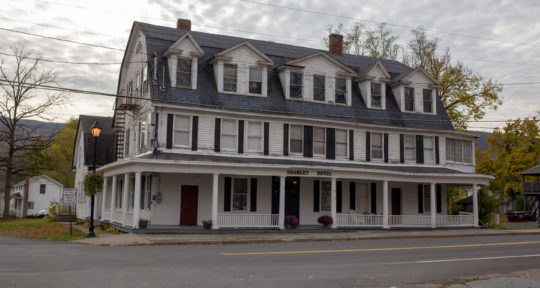 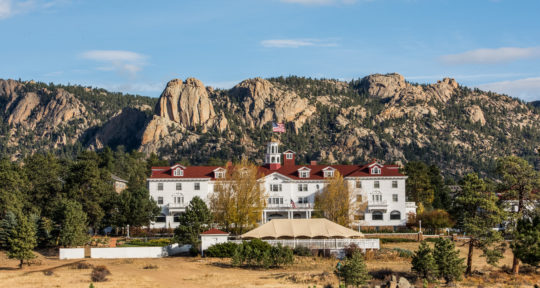