Thanks to the town's suffragettes, Wyoming celebrates 150 years of women voting this year

If land and rock could speak, imagine what stories they could tell. In South Pass City, Wyoming, those stories would speak of early women entrepreneurs and politicians, blazing trails decades before their time.

Over 300,000 pioneer families, mountain men, and trappers trekked through South Pass in the early 1800s. Intrepid hikers can still find their wagon wheel ruts on remote trails, and because of its isolation, the views pioneers enjoyed still remain. The town is the historic staging area for Wyoming’s unprecedented decision to give women the right to vote, hold property, and run for public office.

Of all the routes crisscrossing Wyoming, Highway 28—which runs near South Pass City—holds a special place in history. State legislators dedicated the route in the spring of 2018—in celebration of the 150th anniversary of women in Wyoming getting the right to vote.

The Wyoming Women’s Suffrage Pathway runs through a wide-open stretch of the countryside, but its placement is significant. As Wyoming was the 44th state to join the union in 1890, mile marker 44 was chosen to begin the route. That dedicated stretch of road, ending at the boundary of the Shoshone National Forest, is 19 miles long—a nod to the Nineteenth Amendment, which gave all American women the right to vote.

But by 1920, when the amendment was ratified nationwide, women in Wyoming had already been voting for half a century.

In South Pass City, now a ghost town, history seems skewed. Seventeen buildings remain of over three hundred. Scattered, most have wide spaces in between. There’s a good reason for the gaps—and women entrepreneurs led the change.

“The mining communities were open doors for a lot of women. The region needed suppliers of food, saloons, newspapers, and if there wasn’t a man to do it, then turn around and let a woman do it,” says Joe Ellis, superintendent at the South Pass City State Historic Site.

As the Highway 28 turn-off slopes to Main Street, visitors can’t miss the ruddy, cavernous mining complex stepping down the hill. The Carissa Mine has persevered through booms and busts. People left as the gold rush faded and the transcontinental railroad opened. In the 1880’s, shrewd business woman Janet Sherlock organized the demolition of abandoned buildings and carted the wood uphill to keep the mine furnaces running—hence the gaps between the remaining structures.

Her entrepreneurial skill was born of necessity when her husband passed suddenly, leaving a large family. Sherlock began leasing buildings and as the laws changed, she was able to buy properties throughout South Pass. Today you can visit several buildings she owned—including her house, the Smith Sherlock General Store, a restaurant that was part of a family-run hotel, and the garage where the area’s first cars were tuned up.

Sherlock followed the lead of fellow South Pass City resident Esther Hobart Morris, who in 1870 became the first woman in the United States to serve as Justice of the Peace. And just before the Great Depression, roustabout Zoe Green enlisted a team of men to move an abandoned Atlantic City mill stick by stick to South Pass.

Before the summer of 1929 was out, the Carissa Mine was crafted into the shape it retains today. Lucky for visitors, the mine no longer depends on the vagaries of gold veins and minerals, but has been adopted into the South Pass City State Historic Site. A Friends of South Pass group runs tours through old mining tunnels, gold-panning competitions, and hikes mid-May through September.

Once it was discovered far south of Lewis and Clark’s treacherous trail through the Rockies, Wyoming’s South Pass corridor split into trails leading to the Northwest where trappers would rendezvous, west into the California gold rush territories, and south to Salt Lake City.

Before the gold rush, the open promise of freedom and land lured early pioneers to leave everything they knew behind and go west. Author and sculptor Veryl Goodnight created the life-size bronze of a young woman on the trail that stands in front of Cheyenne’s Old West Museum. His poem, “No Looking Back,” captures pioneer women’s plight:

Too young and naive
to think they could fail

Too full of visions
for the end of the trail

They stored their silk dresses
and donned calico

To join in the cry
of Westward Ho…

Fame found Esther Hobart Morris when she journeyed west. South Pass had quickly become the raucous center of the region’s gold rush. Nearly 2,000 people clambered into the town and a pair of breweries, a dozen saloons, and several brothels opened on the main street. The Civil War had ended a few years earlier and dozens of Union and Confederate soldiers, who had been shooting at each other, had to find their way into business together. Czech miners, Irish settlers, and Chinese immigrants came too. Esther Morris, an orphan, widow, and mother, stepped from her stagecoach into the Wild West and made history before she left South Pass.

Legend has it there was a tea party where Morris convinced Bright to bring the voting rights bill forward. Bright had come west with his much younger wife, Julia, an active East Coast suffragette. But Ellis doesn’t buy the myth.

There were attempts at repeal, but Wyoming remained the first state to give women far-reaching rights.

“The tea party didn’t happen,” he says. “It was a very tricky environment. The story of the suffrage vote is kind of murky. In that 1868 legislative session, Bright, a Virginian Confederate, was appalled by the Fourteenth and Fifteenth amendments which gave slaves the right to vote. Why shouldn’t his younger wife have the same rights? As president of the Territorial Council, he introduced the bill and, for a variety of reasons, it passed.”

There were attempts at repeal, but Wyoming remained the first state to, in 1869, give women far-reaching rights.

What’s indisputable is that Morris was appointed Justice of the Peace and fearlessly locked up her predecessor John Stillman when he refused to relinquish his court docket to a woman. She released him the next day because her self-interest in the case wasn’t “fair.” Records show that she managed legal business in a balanced manner from her log cabin courtroom until the end of her term. The five-room cabin she lived in with her family has been rebuilt in South Pass.

Morris ended her days in a modest house not far from the State Capitol in Cheyenne. It’s a few blocks from the Capitol building, which is undergoing a multi-million-dollar renovation. Once reopened, the larger-than-life bronze of the implacable Morris will emerge from the tall crate it’s been stored in. It will be polished to match the Capitol’s new shine and, again, Esther Hobart Morris will inspire all who enter.

South Pass City has been through cycles of success and failure. Today, a small sign at the town’s entrance reads: ”Population: About 5 people, approximately 4 dogs, roughly 2 cats. Elevation: 7905 feet.” The ghost town is quiet until the snow clears and the South Pass historic sites come back to life.

By spring campsites reopen. Bikers and hikers take to the Continental Divide National Scenic Trail and pick up supplies at the Smith-Sherlock General Store in town. Wildlife lovers search for mule deer, antelope, moose, and beaver along the three-mile Volksmarch Trail. Many bird species nest and hunt in the area. Anglers dip into lakes and streams.

The city needs constant attention to keep it running. Another intrepid woman, Pam Spencer Hockett, one of the state’s first AIA listed members, spends summers working to keep the ghost town open. Just as Esther Hobart Morris convinced those resisting her new legal powers, Spencer is leading other builders to adopt current building science. As the South Pass architect, she designs renovations—but you might find her guiding tours, searching for artifacts in recently uncovered tunnels at the Carissa Mine, or hauling wood much as her historic sisters did.

In honor of International Women’s Day, Roadtrippers Magazine is celebrating women all week. Check back in tomorrow for more stories. Elaine Masters is a passionate traveler, freelance writer, and video storyteller. As founder of Tripwellgal.com, she covers culinary trends, conscious travel, and overlooked experiences. A scuba diving and seafood fanatic, Elaine agrees with Helen Keller (who she once played onstage) that "Life's an adventure or nothing." 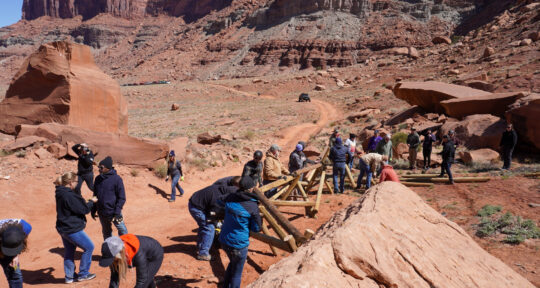