More than 110 million years ago, the area around Glen Rose was at the edge of an ancient sea—today it contains perfectly preserved tracks

More than 110 million years ago, the area around Glen Rose, Texas, was at the edge of an ancient sea that once covered much of the Lone Star State. Fossiliferous limestone deposits from crustacean shells formed mud with the perfect consistency—not too wet or too stiff—to preserve animal tracks.

Eons before Native American tribes hunted in these rivers and forests, dinosaurs were king. Herbivorous dinosaurs came to forage on the enormous tropical palms and conifer trees that grew inland from the shore. Carnivorous dinosaurs followed to feed on the plant-eaters. As dinosaurs occasionally crossed the tidal flats, they left behind their tracks in the mud. Today, you can walk in the impressions they left behind in the bed of the Paluxy River.

The best place to see one of the highest concentrations of dinosaur tracks in Texas is at Dinosaur Valley State Park located just northwest of Glen Rose. The park’s land was purchased from private owners in the late 1960s and opened to the public in 1972. The park boasts some of the most pristine dinosaur footprints in the world, with four major trackway sites featuring collections of two or more consecutive tracks.

Ranger-led programs (both virtual and in-person with COVID-19 safety measures) teach visitors how to find and identify dinosaur tracks, in addition to stars and planets, other wildlife, and more.

Walking along the exposed rock of the riverbank in Dinosaur Valley, I can see several different footprints. Park rangers explain that the large round ones belonged to sauropods, four-legged and long-necked herbivores who foraged in the coastal vegetation. Three-toed tracks nearby show they were followed by theropod predators including the Acrocanthosaurus, a smaller version of the Tyrannosaurus rex.

A 1908 flood first exposed theropod tracks to George Adams, a young boy exploring the Paluxy River. In 1937, R.T. Bird was collecting fossils for the American Museum of Natural History when he learned of the theropod tracks. He traveled to Glen Rose where he found a large sauropod track and a near-perfect trackway that included many dinosaurs’ footprints, including both sauropods and theropods. For the first time, scientists could see that sauropods walked on all four legs; the tracks provided valuable evidence of the dinosaurs’ habits and activities.

Today, visitors wade in the water, crossing the river’s shallow part, and follow tracks in the exposed stone. Walking in real dinosaur footprints and jumping—or trying to—from one track to another turns a hike in the 1,500-acre park into a scavenger hunt through time. I watch as a young boy puts his tiny foot inside of a large dinosaur footprint and marvels at the difference.

When water levels in the river run low in the late summer, the tracks are more noticeable along the riverbank. During the summer months, the Paluxy River typically stops flowing, leaving only isolated pools—all the better to walk where the dinosaurs once roamed.

From New York to Texas

At the entrance to the parking lot, a 50-foot-tall toothy Tyrannosaurus Rex and a sleepy-looking Brontosaurus welcome visitors to the park. The fiberglass giants were made by the Sinclair Oil Company as part of the company’s Dinoland Pavilion exhibition at the 1964-1965 New York World’s Fair in Flushing, Queens.

Dinoland included nine life-size dinosaurs in total, all of which were barged 125 miles down the Hudson River on their way to Flushing Meadows Corona Park in Queens. But it was the gentle giant, Dino the Apatosaurus (originally called a Brontosaurus), that captured the hearts of fair visitors. He was advertised as weighing 20 tons and stretching 780 feet—or “56 kids”—long.

After the World’s Fair ended, the exhibit was dismantled. Dino had his animatronics removed and went on to appear in the 1966 Macy’s Thanksgiving Day Parade. The other dinosaurs were scattered around the country into private and public collections and in 1970, Dino—along with his T. rex buddy—found a permanent home guarding the entrance to Dinosaur Valley State Park.

We pause in the sunshine, high on a bluff, overlooking the winding shallow river below. I try to  imagine the magnificent creatures that once walked these paths, leaving their tracks for us to follow today. 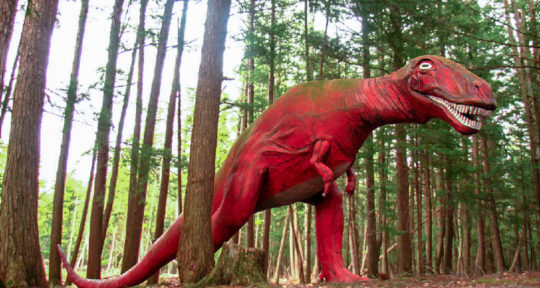