Most U.S. state parks have traditional camping and hiking opportunities, but these 12 offer more unique adventures

Across the U.S., more than 10,000 state parks offer opportunities for visitors to bike, hike, climb, camp, snowboard, ski, snowshoe, and soak in stunning views. Some experiences are iconic, such as strolling through the majestic redwoods at Jedediah Smith Redwoods State Park or watching as 750,000 gallons of water rush over the falls every second at Niagara Falls State Park. But plenty of lesser-known parks offer incredible adventures that reach beyond well-worn hiking trails and showcase a variety of stunning natural landscapes.

Here are 12 state parks that offer unique experiences for anyone ready to unleash their inner adventurer.

In the winter, families in the Midwest flock to Pokagon State Park, known as  “Indiana’s Winter Playground,” to ice fish, snowshoe, cross country ski, or speed down the park’s timeless toboggan run (one of the last still in operation in the Midwest). With a total vertical drop of 90 feet, tobogganeers here reach speeds up to 42 mph on the quarter-mile ride through the park’s pristine woods.

At Coral Pink Sand Dunes State Park in Utah, you can surf a shifting sea of shimmering sand. It took more than 15,000 years of continual erosion of the nearby Navajo sandstone cliffs to form these massive dunes. Sand boards (stand-up) and sand sleds (sit-down) are available for rent, so you can surf the dunes of this 3,730-acre nature-made playground.

More than 8,000 gallons of 128-degree Fahrenheit water flow every 24 hours over the colorful terraces along the Bighorn River at Hot Springs State Park in Wyoming. Soak your worries away at the park’s free bathhouse, where the thermal waters are believed to have healing properties. Post-soak, visit with the park’s resident bison herd: During the late fall and winter months, the park bison are fed a special treat at 8:30 a.m. daily to supplement their diets, so you can get up close and personal with our national mammal.

At Kaumana Caves State Park, descend into a 25-mile-long lava tube formed from an 1881 flow from Mauna Loa, the world’s largest subaerial volcano. You’ll enter the magnificent lava tube by ladder, through a collapsed skylight. Sunlight illuminates the initial passage, but bring your flashlight to explore deeper. According to local lore, the 1881 flow stopped within 1.5 miles of Hilo thanks to the divine intervention of Princess Ruth, who camped in front of the flowing lava and begged Pele, the goddess of volcanoes and fire and the creator of the Hawaiian Islands, to spare her beloved city.

You’ll find a variety of ecosystems at scenic Jonathan Dickinson State Park, including pine flatwoods, mangroves, and swamps. But once upon a time, beyond the many alligators that live here, a legendary local called this corner of Florida home. Take a 90-minute pontoon ride down the Loxahatchee River, which flows through the park, and you’ll stop at the restored 1930s homestead of Trapper Nelson, the so-called “Wildman of the Loxahatchee,” who once lived off of the land as a trapper and fur trader. Nelson’s camp morphed into Trapper’s Zoo and Jungle Gardens, and the abandoned attraction makes for a mysterious state park adventure. Trapper’s peculiar death in 1968 only adds to the eeriness.

Slide Rock State Park in Arizona boasts a nature-made water park, complete with an 80-foot-long slide formed by the slippery red-rock bed of Oak Creek. Bring an inner-tube or body surf the slippery algae-covered rocks for a state park adventure to remember.

Located just 30 miles east of downtown Atlanta, Panola Mountain State Park offers a whopping 1,635 acres of leafy forests. If you’ve ever dreamed of climbing a towering tree into the canopy, the park offers Tree Top Excursions, which are guided, rope-assisted journeys into the treetops. Daredevils can challenge their tree-climbing skills by taking on “Naomi Ruth,” a Southern Red Oak that reaches around 100 feet into the sky.

Related Bears, Bigfoot, and blackberries: Georgia’s Okefenokee Swamp is like ‘no other place in the world’

The 1,000-foot-deep gorge at Tallulah Gorge State Park is one of the most spectacular canyons in the eastern U.S. The park’s Hurricane Falls Trail runs along the upper rim, and only the most adventurous hikers will dare to cross the wobbly suspension bridge, which sways 80 feet above the gorge’s rocky bottom.

Hunting Island State Park features 5 miles of unspoiled South Carolina beaches, surrounded by a vast marsh and maritime forest. Visitors are welcome to climb the historic Hunting Island lighthouse: Built in 1859 and rebuilt in 1875 after it was destroyed during the Civil War, the only publicly accessible lighthouse in South Carolina comprises interchangeable cast-iron sections.

Today, it’s one of the largest public campgrounds in the U.S., but from the Civil War until World War II, Fort Stevens State Park guarded the mouth of the Columbia River. The rocky coastline here was once known as the “Graveyard of the Pacific,” and visitors to the park can explore one of its casualties: the wreck of what was once a 275-foot-long, four-masted ship that landed here in 1906.

Ride an elevator up 2,280 feet above sea level inside a 535 million-year-old monolith at Chimney Rock State Park. At the top, 75-mile panoramic views of Hickory Nut Gorge and Lake Lure await. Adventure-seekers can forgo the elevator and hike to the top of the 315-foot rock formation via the challenging Outcroppings Trail.

Located on Wisconsin’s Door County peninsula, Peninsula State Park offers endless bike trails and a sandy beach with sweeping views of Green Bay. Tucked into the park’s woods, a 650-seat amphitheater stages everything from musical comedies to Shakespearean dramas under the starry sky in the summer months. Bears, Bigfoot, and blackberries: Georgia’s Okefenokee Swamp is like ‘no other place in the world’ 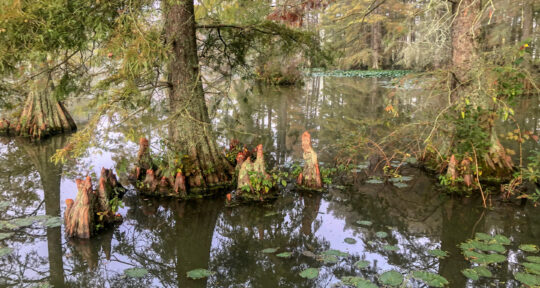