In Quebec, a Belgian ‘alchemist’ is turning tomatoes into world-class wine

Omerto produces 30,000 bottles of tomato wine annually—and it's been known to fool the world's best sommeliers

Through the misty rain, I see a goddess. She’s perhaps 12 feet tall and wears a skirt of twisting branches. A living hat of green covers her braids. In her right hand, she holds a bright red tomato. Her left arm is outstretched toward the leafy rows of the lawn flanking the asparagus-colored house behind her. She looks like she’s about to cast a wandless spell.

While the sculpture—Stéphanie Rochette’s “Déesse de l’agriculture et des moisson” (Goddess of Agriculture and the Harvest)—may be enchanting the tomatoes in the garden of this rural Quebec home, it’s inside the house that the alchemy happens.

In a large room in the ground-level basement, Pascal Miche turns tomatoes into wine.

Charlevoix, the home of Omerto

The sunshine necessary for ripening tomatoes has given way for rain on the morning of my visit. I’m at the site of the supplier, fermenter, bottler, shipper, shop, and world headquarters of Omerto, the world’s first tomato wine company, just outside the town of Baie-Saint-Paul.

Baie-Saint-Paul is one of the two principal towns in Charlevoix, Quebec, each with a population under 10,000. The region of Charlevoix begins an hour east of Quebec City, on the north side of the mighty St. Lawrence River. The other main town, La Malbaie, is further east and closer to where the beluga whales frolic.

Charlevoix is famous for its ski hills (a Club Med will open here in 2020), hiking, bio reserve, wildlife, and charming towns. It’s favored by young entrepreneurs, culinary producers, and artists wanting a better lifestyle than they can find in Quebec City or Montreal. Popular with tourists-in-the-know, the area is dotted with shops, galleries, restaurants, and inns.

Baie-Saint-Paul is an ideal home and headquarters for Pascal Miche and Omerto. The terroir—the ways in which a region’s specific weather and features affect the taste of crops grown there—created by the St. Lawrence River and sunny Quebec summers is perfect for tomatoes.

From Belgium to Quebec

Miche immigrated to Canada from Belgium in 1988. His great grandfather, Omer, had an abundance of tomatoes at his Belgian farm and began making tomato wine in the 1930s. Omer Miche and his wife were considered alchemists by locals. They were well known for transforming common ingredients into deliciousness, even serving their creations to princes and barons in Belgium.

Pascal Miche—tall, speaking mostly in French, and almost always smiling—explains that his great-grandfather initially was simply looking for a way to preserve more tomatoes. “You can only jar so much,” he says. But when World War II hit, tomato wine production was delayed until the 1950s and never really took off beyond making enough for family special occasions.

Raised by his great-grandparents, Miche was one of the very few who knew the secret recipe. He promised his great-grandfather, “I will make this product one day.”

Miche moved to Canada, studied wine and winemaking, researched tomatoes, and began making his family’s tomato wine in Charlevoix. Miche’s testing of the best heirloom tomatoes for the region was critical. He initially planted 16 different varieties and then spent eight years determining the six that were ideal for his wine.

Miche grows his tomatoes organically, and his award-winning wines are certified organic. He says the salt air from the St. Lawrence gets on the tomato plants and keeps insects at bay. If needed, he’ll make a spray from rhubarb leaves and warm water.

When asked about keeping larger animals out of the garden, he laughs, saying, “Fences are expensive!” Instead, each May, Miche collects hair from local hairdressers, encloses it in old onion bags, and leaves it near the tomatoes. “Deer and bears can smell human hair from ten kilometers away; they’re scared of humans and stay away,” he says.

Vineyards take up a lot of space—tomatoes, not so much. Miche’s backyard garden holds about 6,000 tomato plants. From this, he can produce 30,000 bottles annually. According to Miche, because tomatoes consist of 96 percent juice, a tomato plant yields more than three times as much juice as a grapevine.

After pressing the ripe tomatoes, the alchemical process of fermenting the juice with yeast, filtering, clarifying, and barrel-aging takes about nine months. Besides using tomatoes instead of grapes, the process is similar to that of traditional wine-making.

Miche doesn’t waste the solids from his tomato pressing either. He freezes them and turns them into a tomato-based alcoholic spirit. It’s aged in the cherry and chestnut barrels that are no longer ideal for aging his tomato wine. Miche also makes syrups of rosemary and ginger, and happily shares recipes for all his products.

I was surprised by the taste of Omerto’s wines, but not as surprised as some of the world’s best wine experts. When Miche introduced his tomato wine at the World Sommelier Championship in Japan six years ago, none of the 400 sommeliers trying it could identify that the wine was made from tomato. Omerto tastes like wines made from grapes.

Omerto wines have a 16% ABV, or alcohol by volume. Like tomatoes, they have no tannins (a naturally occurring compound in grapes that give certain wines a characteristic dryness). The wines range in color from straw to pale gold to amber. The fruity Omerto Moulleux is similar to, but not as sweet as, a white port. It pairs well with local foie gras, cheese, and seafood. According to Miche, “It is very interesting with white chocolate.” The version aged in cherry and chestnut casks, called Omerto Barrique Cerisier/Châtaignier, takes on the components of sherry. Omerto Acacia Demi-Sec (semi-dry), aged for nine months in acacia casks, is similar to an aged cognac.

Miche’s dry Omerto Sec, vegetal and citrusy like a sauvignon blanc, is my personal favorite. I sampled it with a local cheese with a similar terroir to Omerto’s tomatoes. Omerto Sec pairs perfectly with Laiterie Charlevoix’s Le 1608 cheese, made from the milk of the distinctive but endangered Canadienne cow. Miche adds that Omerto Sec is also ideal with game, wild mushrooms, smoked salmon, and charcuterie.

Charlevoix visitors can take a guided tour of Omerto’s tiny production facilities. The tour includes tastings of four products and, of course, time to shop for souvenirs.

Omerto wines are not only served by the glass, but are available in dishes at many local restaurants. Charlevoix chefs use Miche’s tomato wines in recipes spotlighting other local ingredients. In 2018, G7 leaders sampled Omerto at their summit that took place in Charlevoix. Pastry chefs at Fairmont Manoir Richelieu in La Malbaie, which hosted the summit, incorporated Omerto into the tiramisu served at the farewell lunch.

Agritourism is a highlight of Charlevoix. It’s not just Miche who takes advantage of Charlevoix’s terroir. Chefs and producers create organic meats like emu and duck, honey, cheese, beer, cider, chocolate, flour, bread, maple syrup, mushrooms, lavender, and more. Charlevoix’s tourism bureau has created Flavour Trails-—maps that guide tourists to several restaurants and producer sites that can be explored easily in a day. Sampling is encouraged.

Dotted along the Flavour Trail are sculptures by local artists, so visitors can feast their eyes as well as their bellies. This is why Stéphanie Rochette’s goddess guards Omerto’s tomato patch. She, like Pascal Miche, creates magic out of tomatoes.

Omerto offers guided tours three times per day, introducing visitors to the art of tomato wine-making. It’s encouraged to book early. The tour is $10, with the option of adding a tasting for an additional $9 per person. 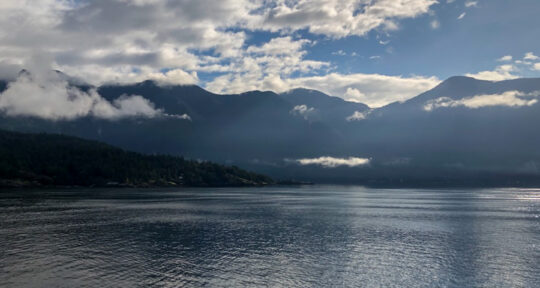