Watch: A group of pro skateboarders embark on the California road trip of a lifetime

“Rolling” is a testament to the power of friendship, adventure, and the open road

It all started with an idea: to explore the most scenic skateboarding spots in California and Nevada. We gathered a group of friends—who also happen to be pro skateboarders, filmmakers, and photographers—and hit the road in a 35-foot RV, embarking on the West Coast road trip of a lifetime.

Our crew gathered before sunrise to begin loading gear into our 35-foot RV, which we had named Madonna. Inside our adventure mobile was a bedroom, shower, full kitchen, refrigerator, dining area, and a James Bond-esque retractable 45-inch TV. The sun had yet to come out but we were all brimming with that sense of excitement you inevitably feel before an endeavor like this.

I envisioned this trip to be an exploration of the pioneer spirit in skateboarders and how that materializes on the road. As that thought swirled around in my head, the engine started and our adventure was underway.

Madonna approached downtown Los Angeles and crossed the 4th Street Bridge at sunrise, when most of the city was still asleep. We drove through the jewelry district and past Walt Disney Concert Hall, surrounded by the high-rises that make up the downtown skyline.

As the morning light crept over the city, we merged onto Interstate 5 and began heading north. Garrett took on driving duty for the first leg of the trip and about an hour in, Manny looked out the window and spotted a concrete drainage ditch off the highway.

“Hey Garrett, get off at the next exit!” he yelled up to the front.

The RV pulled off and we found the spot; a perfectly skateable slab of concrete with a ledge on top of the bank. We grabbed our boards and gear and started filming. The guys all filmed tricks and notably, Garrett landed a front foot impossible 180 on the bank. Off to a solid start. But we had ground to cover. The crew jumped in the RV and we were back on the road.

Mammoth’s hot springs are straight out of a painting

I knew about the natural hot springs that were just outside of Mammoth Lakes, California. I had visited them years ago with my girlfriend Lauren—but the directions were a little hazy in my head. It was something along the lines of “turn right at the abandoned blue church and then hang a right somewhere after that.” So that’s what we did.

We took a right at a random turn-off as Madonna bounced and shook down the dusty, bumpy makeshift road. This got Garrett a little irritated in the driver’s seat, much to the amusement of the rest of us. The giant RV was kicking up dirt like crazy and there was an enormous cloud of dust behind us, which the small car in our rearview mirror must have greatly appreciated.

After a mile or so, we parked in a big circular parking lot and made our way down the boardwalk to the group of natural hot spring pools. Eureka! This place was visually incredible. The springs are nestled in a flat land of marshy ground with a backdrop of mountains from the Inyo National Forest. It looks like a painting and made for some beautiful shots.

There were several other people at the springs. We made a few friends and sparked up interesting conversations while soaking in the natural hot water. But once again, it was time to get going. Back to the highway.

The first order of business once we got into the Bay Area was to pick up our longtime friend, pro skateboarder Corey Duffel. My brother Garrett and I have been friends with Corey for over fifteen years and have spent a lot of time skating and filming together in Walnut Creek and San Francisco.

As pulled up to Corey’s house, he came jumping out the front door with his signature energy and wild charm. Corey is one of the most iconic and hardworking skateboarders out there and the crew was all excited to have him on board.

IT WAS A CRISP AND SUNNY DAY, SAN FRANCISCO’S TYPICAL BAY BREEZE GENTLY BLOWING. WE COULDN’T HAVE ASKED FOR BETTER WEATHER.

We approached San Francisco via the Bay Bridge and pulled off on Treasure Island. There are some incredible lookout points there and we had a great time exploring and skateboarding on the aged territory. We then made our way into the city to the legendary 3rd and Army ledges, tucked away on the waterfront near AT&T Park.

It was a crisp and sunny day, San Francisco’s typical bay breeze gently blowing. We couldn’t have asked for better weather. The guys landed a few tricks before we headed to one of my favorite restaurants, Boudin. It’s a staple establishment on the wharf with amazing seafood and clam chowder bowls.

Next up on the agenda: Mare Island, an old shipyard discovered by Spanish explorer Perez Ayala in 1775. With the Napa River forming its eastern side, the views and towering metal port spires are a sight to behold—and to skate. We rolled through the island on our boards, exploring and snapping photos among the ancient scenery.

Corey, Garrett, and Manny grabbed the metal launch ramp out of the trunk and took turns launching over the Mare Island concrete sign. The guys landed their tricks just as the sun dipped down and we took in the sunset, reflecting on the day.

We piled back into the RV and reviewed the day’s footage on our James Bond TV, which had already become a tradition at the close of each day. Hungry to keep the adventure going, we decided we would camp that night. Manny opened the Roadtrippers app and found a state park in the Sonoma Mountains called Sugarloaf Ridge. We crossed the Golden Gate Bridge, and made our way northeast.

A serendipitous moment in the Sonoma Mountains

As we pulled into the Sugarloaf Ridge campgrounds, we made a wrong turn. It was pitch black, freezing cold, and our cell reception was nonexistent.

As the crew discussed what to do next, headlights from a car in the distance started approaching the RV. We waited, hoping whoever was in that car knew their way around and could help us. Once the car pulled up, a spirited older lady rolled down her window and said, “What’s up guys? You look like you need some directions!”

It just so happened that this was the camp groundskeeper, and she told us to follow her. It was one of those serendipitous road trip moments where the energy is just right and Lady Luck swings by for the rescue.

IT WAS ONE OF THOSE MOMENTS WHERE THE ENERGY IS JUST RIGHT AND LADY LUCK SWINGS BY FOR THE RESCUE.

The woman guided us to a campsite and we proceeded to gather wood for the fire. As the flames grew higher, we huddled around its warmth and light. It was a stark contrast to the cold, dark backdrop of the Sonoma Mountains.

Jacob and I took turns playing my acoustic guitar while the guys roasted hot dogs and marshmallows. It was a peaceful scene. A bonding time between friends where you can just sit together and reflect over the sound of guitar chords and crackling campfire.

Manny and Jacob slept outside with only their sleeping bags. The rest of us opted for the warm beds aboard Madonna. We decided our beauty sleep was necessary for the adventure-filled day that lay ahead.

The magic of the Redwoods in the fall

It’s always amazing to see the scenery of a campsite in the morning after having arrived in the dark. We awoke to an amphitheater of dark green trees that lined the majestic mountaintops of the Sonoma Valley. Then we packed up our gear and made our way to the Armstrong Redwood National Forest.

Everyone was excited for this stop. We knew we were in for something special as we drove through the small towns that led us up the hill. We found a place to park Madonna, and then we grabbed our skateboards and camera gear.

As we walked through the quiet pathways, our heads were pointed up, collectively mesmerized by the giant redwoods that towered above us. Since it was the month of October, there were leaves softly falling all around us. It was as cinematic and visual a location you could ever hope for. I knew that every shot here needed to tell a story.

I remembered a quote I read from a great director that said, “Let the location tell you how to shoot it.” And sure enough, I looked around and noticed a clearing of land that dipped four feet below the ground level. Troy and I got down there, set up the shot, and filmed our lift shot over the grassy marsh as the guys skated by.

It was a pure and epic moment for us and perhaps my favorite shot of the entire trip. We looked back at what we had just captured and kept strolling through this immaculate display of nature, sun rays peeking through the leaves. After the ride, we all sat down on a makeshift wooden gatepost and just talked for awhile. It was a hard place to leave.

A detour and a tattoo in Reno, Nevada

Madonna trekked on, but not before another fill-up. When you travel by RV, you are stopping for gas—a lot. Like, really a lot. So much that we had started calling this trip the Gas Station Tour.

We rolled into the town of Truckee, where Cody Benjamin, a friend of Corey’s, invited us to skate his front yard. He had recently converted it into a full-fledged skatepark with launch ramps, flat bars, boxes, and a perfect concrete quarter pipe. Cody’s house is situated on a beautiful backwoods road and, once again, we found ourselves surrounded by amazing scenery.

Our friend and skateboarder Che Harrigan flew in from Los Angeles, and just as he arrived, Corey threw his board down at full speed and launched the most perfect melon grab we’d ever seen out of the concrete ramp.

We thanked Cody for the session and continued on, driving around Lake Tahoe on both the California and Nevada sides, finding scenic lookouts, places to fly the drone, and—of course—places to skate.

Manny began drawing on a notepad. It was a sketch of the RV with the redwood trees behind it. He looked up and said, “Let’s go to Reno. I know a tattoo guy there and I want to get this on my leg.” So we did.

Madonna headed northeast and we met up with Reno legend and skate shop owner Eric Lantto, who accompanied us to Aces Tattoo. Manny has a lot of tattoos and each one means something special to him. It was cool to watch him get our trip etched on his body as a permanent badge of honor.

One of the cool things about being on the road is that friendships get stronger and perspectives get fresher. As we headed back to Los Angeles, all the moments of the trip flooded my head. We had just pulled something off. Even if we weren’t sure exactly what it was yet. But we all knew it meant something. It meant a lot. 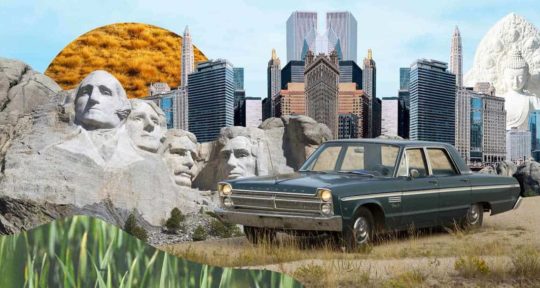 ‘We the people saved Route 66’: How one man’s dedication is keeping the Mother Road alive Get road trip ready: How to prepare your car for a road trip