Detours: 15 places to explore between Arizona and Orcas Island

Detours help you find lesser-known places to visit all over the U.S.
Heading out on Garrett Hill’s ultimate skateboarding road trip? Use this guide to discover hidden gems along the way.

The West Coast may be the heart and soul of skateboarding culture, but there’s obviously so much more to do than just skating; this is prime roadtripping country, after all. From hunting aliens in the Mojave and surfing in Santa Cruz to exploring California’s redwood forests and getting a taste of the real-life “Twin Peaks” (remember, the owls are not what they seem), make the most of the trip and enjoy the journey’s strange little detours.

For a taste of vintage kitsch, make the white-knuckle drive up to Oatman, a “living” ghost town practically run by wild burros. Oatman was originally a mining town, and Route 66’s path right through it kept the settlement alive, at least until the 1950s, when the new highway bypassed it. Luckily, Route 66 nostalgia has kept nearly 40 shops, restaurants, and attractions open in town. Stop into the Oatman Hotel’s Dollar Bill Bar, and make sure to say hi to the burros if you see them wandering the streets. They’re descended from burros that worked the mines; these animals were set free when the mines closed down, but they’ve stayed close to town.

Today, the Integratron is a spa built on a vortex at which  you can experience a relaxing sound bath. However, believe it or not, its original purpose was much more bizarre. The Integratron was built between 1957 and 1959 by airplane mechanic and flight inspector George Van Tassel. Van Tassel was also a “ufologist” and claims he built it based on instructions he received telepathically from beings who lived on the planet Venus. The wooden dome was meant to be an “electrostatic generator for the purpose of rejuvenation and time travel.” When you head for your sound bath, keep an eye peeled for unidentified flying objects—the massive freestanding boulder nearby is said to be a hotspot for sightings.

Elmer Long is a folk artist who specializes in turning trash into treasure. His Bottle Tree Ranch is a forest of “trees,” the branches of which are made up of glittering, upcycled glass bottles. They’re all adorned with other odds and ends Elmer has  found throughout the years. He’s been growing the forest for 18 years, and now has more than 2,000 trees. The purpose of it all? To make visitors think. If he can get one person to see a glass bottle as more than just a glass bottle, he’s done his job.

For those among U.S. who didn’t watch “The Founder,” here’s a brief history lesson on McDonald’s: The McDonald brothers were known for their San Bernardino burger stand, which they had brilliantly optimized for speed, consistency, and simplicity. Ray Kroc was the man who convinced them to let him franchise their fast-food eatery out all over. Kroc opened the first McDonald’s franchise in Illinois before taking over America, and then the world. The Original McDonald’s Museum is located at the site of the very original drive-in, and is bursting at the seams with history and memorabilia. Check out the original McDonald’s mascot, a Mayor McCheese-style anthropomorphic burger named “Speedy.”

Hiking is a popular pastime in LA, and Solstice Canyon is home to some of the city’s best hidden gem trails. The hiking here is top notch because the trails take you through the ruins of the abandoned Roberts Ranch. It was once home to Tropical Terrace, a mansion built by famed African-American architect Paul Williams for Fred Roberts, a supermarket mogul, and his wife Florence. Sadly, the canyon is incredibly prone to wildfires, so the mansion burned down in the 1980s (despite the many precautions taken by Fred to fire-proof the home)—but not before it was photographed by Architectural Digest. It may be a mere shadow of what it once was, but it’s a haunting and totally cool hike.

This is LA, so you can’t throw a rock without hitting movie history. The Paramount Movie Ranch unit of the Santa Monica Mountains National Recreation Area is still an active film set, but it’s open to visitors who want to stop by and maybe even see a movie being made. It’s served as the Wild West, ancient China, colonial Massachusetts, and much more since the 1930s. Make a point to stop by the Western Town, which was built in the 1950s and has been used in countless Westerns—and for filming “Dr. Quinn, Medicine Woman.” There are plenty of hiking and biking trails to explore as well.

The best way to describe the Madonna Inn is a John Waters acid trip meets your grandma’s house meets a Liberace fever dream. The rooms at the famously over-the-top retro hotel are all themed and the attention to detail in the decor is pretty incredible. The mastermind behind the hotel, construction magnate Alex Madonna, started building it in 1958 as an antidote to the carbon-copy motels and chain hotels that line America’s highways. Luckily, you don’t have to stay the night to appreciate the aesthetic. You can stop into the restaurant—bedecked in roses—for lunch and a slice of pink champagne cake. Oh, and gentlemen, make sure to use the rock waterfall urinal in the bathroom.

Pinnacles is our country’s newest national park, having been created by President Obama in 2013. Its signature feature, the pinnacles, are the eroded remains of a long-extinct volcano. It’s popular with rock climbers, spelunkers who like to explore the talus caves, and wildlife spotters in search of bats, condors, owls, eagles, and more. For hikers, the High Peaks Trail is 9.3 miles of breathtaking beauty. It takes you up stone spires, into caves, through canyons, and along creeks, showing off a little bit of everything this park has to offer.

The Santa Cruz Surfing Museum is located inside the historic Mark Abbott Memorial Lighthouse and overlooking famed surf spot Steamer Lane. It traces the origins of the sport from its invention in Hawaii in the late 19th century to the surf rock craze of the 1960s all the way to modern day. In addition to the photos and videos they use to tell the story of surfing, the museum also boasts a comprehensive collection of vintage boards, from redwood planks used in the 1930s to early foam and fiberglass models. Whether you’re just curious about the sport or want to chat with local experts about where to catch some waves, there’s a lot to learn here.

This next stop is for the indoor kids. The Computer History Museum in Mountain View, the heart of Silicon Valley, lets you geek out over 2,000-plus years of computing history. You’ll get a little bit of everything here, from Ada Lovelace to Pong to self-driving cars. The demo labs are unexpectedly awesome. And they demonstrate exactly how computers operated in the late 1950s. This is the era during which computers were on the cusp of making their way out of labs and into homes.

Detour 12: Avenue of the Giants

Redwoods National and State Parks is actually a system of multiple parks that protects the rare stands of massive coastal redwoods in Northern California. The best way to experience these majestic redwoods is with a drive along the scenic Avenue of the Giants. It’s 31 miles long and cuts through Humboldt Redwoods State Park, passing by trails, groves, and all kinds of attractions like the Shrine Drive-Thru tree, which is a classic redwoods experience.

This stop will require a bit of timing, since it’s best seen at high tide, but experiencing the might of Thor’s Well is worth it. It’s a hole in the rocky Oregon coast, about 20 feet deep, that forms a natural fountain when the waves fill it. Exercise extreme caution and keep your distance when visiting, as the current can be quite strong. Pro tip: You can also spy the Spouting Horn from this location. When the waves hit the Spouting Horn’s rocks just right, a geyser of water is tossed high into the air.

Between Portland and Orcas Island

The 1980 eruption of Mount St. Helens was the deadliest volcanic event in U.S. history. The lava flow covered 230 miles, taking the lives of 58 people, destroying 200 homes, and 187 miles of highway. The visitor center at Silver Lake offers a great view of the mountain and the massive caldera formed by the blast. In addition, it has some really informative exhibits on the geology and history of the volcano and the 1980 eruption. There’s also a trail if you have time for a hike. You can still see scars from the blast that occurred nearly 40 years ago, as you explore the park. The volcano is still active. So, if you’re planning to hike the rim or to backcountry camp, make sure there are no alerts out.

Make your last stop at one of Washington State’s prettiest waterfalls, Snoqualmie Falls. The two-acre park has an observation deck, a gift shop, a trail to the base of the falls, and free parking. If you’re a fan of “Twin Peaks,” you’ll no doubt recognize the building next to the 270-foot cascade as the Great Northern. In real life, it’s called The Salish Lodge and Spa, and it’s pure luxury. 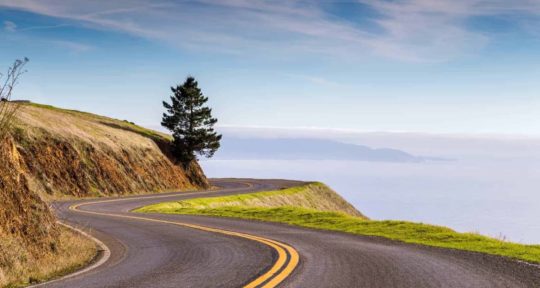 Detours: 13 places to explore between Mount Tamalpais and Moab