The pioneer of alternative parades has been referred to as “the twisted sister” of the Rose Parade, which runs along Colorado Boulevard on New Year’s Day

Imagine perfectly groomed beauty pageant contestants parading themselves in elegant ball gowns showcasing their talents and well-rehearsed speeches. Now picture the complete opposite: a pageant of one-eyed radioactive chicken heads that sing, a drooling monster robot that dances, and unicorns playing bagpipes. This Gong Show-like pageantry is the spirit of the Doo Dah Parade, which marches along Colorado Boulevard (the original Route 66) in Pasadena, California, about once a year.

At this year’s 42nd occasional Doo Dah Parade, everyone from stilt walkers and unicyclists to jugglers and professional air guitarists flaunt their unconventional talents. A coffin go-kart and homemade flying saucers made by local artists are among some of the most eye-catching vehicles.

The pioneer of alternative parades, the Doo Dah has been referred to as “the twisted sister” of the Rose Parade, which also runs along Colorado Boulevard on New Year’s Day every year. In contrast to the multimillion-dollar parade with stadium seating and corporate sponsorships, the Doo Dah is free and open to anyone and everyone. Tom Coston, who has been the parade’s representative since 1995, emphasizes the importance of Doo Dah because it’s a local parade exercising creative expression.

“We are celebrating the idea of do-it-yourself,” Coston says. “Pasadena needs both parades.”

The Doo Dah began as a spontaneous idea by Pasadena locals who were drinking at a bar on New Year’s Day in 1978. They wanted to entertain campers who were waiting overnight for the Rose Parade to begin. The idea was to create a one- time parade, so they gave it a meaningless name. The impromptu event was well-received by the Rose Parade crowd, and they have kept the tradition going ever since.

Former Doo Dah Queen Nancy “Narayana” Urbach belly dances in the parade to the sounds of Robert “Smokey” Miles’ accordion. Miles is seen here as his alter ego “Count Smokula,” a 496-year-old vampire from Smokesylvania who wears a cape and fez (and has a Gene Simmons-length tongue). They both have participated in the Doo Dah every year since it began.

Charles F. Delvalle performs a variety act with dry ice concoctions while dressed as Uncle Fester. Many people have remarked on Devalle’s resemblance to The Addams Family character, so he has appeared as Uncle Fester in the Doo Dah parade since 1995. He wheels around a wagon of gadgets, gizmos, flashing lights, light bulbs, and a bubble machine. “Don’t let things fester,” Delvalle says.

The Radioactive Chicken Heads are a “genetically modified” rock-and-roll band that has performed in the parade since 2014. Their mutant poultry vibrations complement this annual celebration of the ridiculous and absurd.

The Eye, and friend-of-the-eye Evan, makes a third visit to the Doo Dah Parade this year. Interested in your friendship, The Eye is a source of benevolent oddity and communicates to friends through prepared messages on signs carried in the parade. “You are visible,” The Eye says. “Tenderness is your strength.”

Coyote puts eyeball solar lights to his face and says, “I’ve got one who can see.” It’s a quote from space alien cult film They Live, starring Roddy Piper. Coyote owns and operates a flying saucer retrieval and repair service. He and his dogs Luna Verse and Moon Pie parade in a spacecraft vehicle he calls Aura Borealis. The top of the vehicle showcases a flying saucer capsule he claims to have found when he raided Area 51.

Dennis “The Colorful Guy” Miller marches wearing a rainbow ensemble of woven area rugs. He is one of the original parade performers and waves hello to this year’s approximately 7,000 spectators and 1,000 participants.

An environmental activist is dressed as a white and fluffy trash cloud made from disposable plastic grocery store shopping bags. Environmentalist groups participate in the parade to protest consumerism and materialism. One such group puts on a trash fashion show to the Madonna song “Material Girl.” The “trashion” models made their garments entirely from garbage, reminding us that our trash remains forever.

Tortillas being thrown as frisbees are a parade tradition liked by some, and not by others. Tortillas fly from the crowd toward the floats, adding an element of crowd interaction with the parade participants.

The Church of the SubGenius march for the first time in this year’s Doo Dah. They are a satirical religious cult that began in 1953. These magistrates and believers are wearing masks of the group’s founder, J.R. “Bob” Dobbs. Bob was a salesman who claimed to be given sacred messages from a god-like entity that spoke to him through a television set. Members are guaranteed eternal salvation or triple their money back.

Quadruple is the name of this handmade vehicle made by Spencer Buzza. The bed mobile is on hydraulics so it bounces up and down while cruising in the parade. Buzza has ridden his creation at Burning Man but this is his first time at the Doo Dah. It took him 1.5 years and several thousand dollars to build the vehicle, which runs on a 125cc Vespa motor. He rides here with his niece, nephew, and brother-in-law.

Another performer who has been involved in the parade since the beginning is named Bill Perron, known as “The Swami from El Monte.” As a “mental magician,” Perron interprets his dog Cookie’s thoughts. Perron invites attendees to ask his psychic dog questions. One person asks Cookie for the key to life. “Just be in the now, don’t be in the future,” Perron says. “Dogs are happy because they are in the now, humans are not.”

The unofficial Jingle Bells Junior College Marching Band is lead by conductor Sherry Hodge, who is riding a motorized wheelchair because of a recent injury. Hodge’s 60th birthday wish was to have her friends dress as jingle elves in the Doo Dah Parade.

Spyders from Memphis, a David Bowie and Elvis Presley tribute band based in Los Angeles, march in the parade after their performance. Local bands take turns performing on a mobile music stage float during the parade.

Bring a lawn chair, your family, and some tortillas to throw as you watch the Doo Dah Parade, which runs along Colorado Boulevard in East Pasadena. Check the website for the official date and time of the next parade. 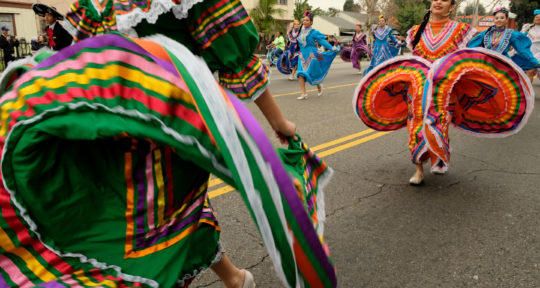 150 years of women’s suffrage: During Cheyenne’s rough-and-tumble Wild West days, the town’s women were the toughest of the bunch