In 1939, Sylvia Gray and her husband Joe opened a furniture store in downtown Greensboro, North Carolina. The three-story space had previously housed a boarding house, a grocery store, and a meeting space for the Odd Fellows. The Grays stocked their store with “seconds,” usually extra furniture from manufacturing hubs in High Point and Thomasville. In the years following World War II, they added army surplus, including tents and canteens, to their offerings.

The couple lived in the building with their three children. Joe managed the downstairs store, Carolina Sales Retail, while Sylvia repaired merchandise for resale and managed the apartments on the second floor. When Joe died unexpectedly in 1955, Sylvia was left alone to care for the children and the business. To downsize, she shuttered the boarding house and moved the family to the suburbs, but kept her beloved store.

Over the years, she added fabric scraps and clothing from the mills in town, buying up secondhand knickknacks from garage sales and thrift stores. The tall shelves became filled with buttons, toys, books, and dishes. She continued to collect items, often refusing to actually sell them. Sylvia felt that each item had a perfect owner—if you weren’t that person, she might raise the price on a whim, but if you were, she might discount it.

When Sylvia died in 1997, the building was boarded up and her merchandise was left behind to gather dust. Today, walking down South Elm Street, you might think you’re passing just another store, one of many in a city where fabric mills and companies such as Blue Bell Overall Company (makers of Wrangler jeans) were once plentiful.

Sylvia’s grandson, George Scheer, was in Greensboro in 2003 on a road trip with friends when he first unlocked the doors to his grandmother’s store—and found it just as it had been when she died, shelves still stocked with her bits and bobs.

Scheer took some items home with him to Philadelphia, but his fascination with Sylvia’s store wasn’t over. A group of writers came to his apartment and found inspiration in her merchandise, creating characters and settings from her items. Scheer came up with an idea and, after graduating college, moved to Greensboro.

“The store had sat there untouched since her death, for a decade,” says Matthew Giddings, the executive director of Elsewhere, and an artist himself. “The family didn’t know what to do with it, whether to sell everything off or what. So when George came to Greensboro after undergrad, he worked out an arrangement with the family.”

Scheer underwent the massive project of archiving each piece and organizing it. Someone came up with the name Elsewhere, and the next year, the burgeoning nonprofit invited artists from around the world to create using Sylvia’s collection.

The family still owns the building and all of the contents that existed when it was a store. For more than a decade now, the living museum has supported creativity in a space that would have otherwise been forgotten. “[The family] have been some of the largest donors to Elsewhere,” says Giddings.

Walking into Elsewhere, it’s hard to know where to direct your attention. Brightly colored suitcases are stacked neatly on a top shelf, while vintage children’s toys are boxed and stacked. In another room, items of clothing are hung from what resembles a chandelier. Egg cartons and mason jars hold hundreds of buttons. It is, in short, sensory overload.

Every piece has been carefully curated and remastered by the resident artists, who visit for periods of one to a few weeks. “The main material is the collection in the building,” Giddings says. “The building itself is something that can be engaged with, interacted with. One person repaired a wall by mending it with adornment. One person put swings in the front space window, which is what a lot of people in Greensboro know about Elsewhere, even if they don’t know what Elsewhere is.”

Projects by resident artists must be approved in advance. One artist put up plaques down Elm Street, telling stories of the people of Greensboro. Another built the kitchen and its storage area that residents use today, and The Porch Project Black Lunch Table was built to foster difficult conversations in the community.

There’s only one rule at Elsewhere: You must create using what’s already there. This also means you never know what may have changed from your last visit. “If it’s going to be destructive, it needs to have a purpose,” Giddings says. “Every time someone cuts a piece of fabric, that fabric doesn’t come back together.”

For visitors and locals in Greensboro, Elsewhere presents a chance to experience the arts in a way that wouldn’t be possible without Sylvia’s extensive collection. But it’s the resident artists that really make Elsewhere unique; they interact with the public during their stay, giving talks and connecting their work to the people who come to view it.

When I visit, Craig Deppen Auge, an artist from Kansas City, is here, making lunch at the end of his residency. He shows off what he’s completed during his time at Elsewhere, including pieces around the garden that resemble directional signs.

The space has continued to host events after reopening in the summer of 2021, including open mic nights and performances by local dancer Jaleel Cheek. “We open the front windows to the museum like an accordion and it becomes a stage facing the sidewalk,” says Giddings. “Anybody can get up on the stage and perform.” 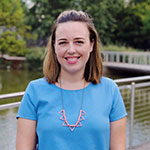