Williams broke down barriers and amassed an enormous portfolio, helping define modern Los Angeles with his private and public buildings

The fight for civil rights in the U.S. has been a serpentine road of big progress and dramatic setbacks. But even if massive progress remains to be made, the overall thrust over the past half-century has undeniably been for the better.

Of particular note has been the world of design and architecture, which remains dominated by the wealthy and elite-educated—Black architects in particular are especially underrepresented. Recent initiatives like the National Museum of African American History and Culture’s (NMAAHC) Rendering Visible, to collect and record the work of Black architects, have helped break new ground. But by and large, the upper ranks of architecture remains a relatively exclusive—and mostly white—club.

But there are exceptions. Paul Revere Williams, fondly remembered in some circles as “the architect to the stars,” was one of the first American-born Black “starchitects.” He broke down barriers and amassed an enormous portfolio over the course of a long career, helping define modern Los Angeles in the process.

Williams became the first Black member of the American Institute of Architects (AIA) in 1923, and later, its first Black fellow. By the time Williams passed away in 1980, he had left his mark on more than 3,000 buildings around the Los Angeles area, either as principal architect or as a consulting contributor.

LA would not be LA without Paul Revere Williams: If you’ve ever flown into LAX, or just happen to be a fan of Modernist architecture, you surely know the Theme Building. The Jetsons-esque airport centerpiece completed in 1961 may be one of the most recognizable structures in California aside from the Golden Gate Bridge. He also designed a bachelor pad for Frank Sinatra; a jaunty, angular desert house for Lucille Ball and Desi Arnaz near Palm Springs; and a cabin for Lon Chaney deep in the John Muir Wilderness.

Williams built grand, populist structures like the delicate 28th Street YMCA in Los Angeles, posh shopping temples like the giant Saks Fifth Avenue department store in Beverly Hills, and utilitarian office towers like the Golden State Mutual Life Insurance Building. He designed or took part in major renovations of iconic hotels like the Beverly Hills Hotel, the now-demolished Ambassador (the site of Robert F. Kennedy’s 1968 assassination), and the Arrowhead Springs Hotel near San Bernardino. His influence stretches beyond California; in Las Vegas, the undulating concrete lobby of the La Concha Motel is now the entrance to the Neon Museum.

Beyond his most iconic public structures, a great many of the houses Williams designed have survived to this day in their original forms. They are peppered throughout the Los Angeles area, from Ontario to Santa Monica. As a tribute to Williams, HomeAdvisor created an illustrated map of 43 of his most notable California homes.

Though many have been demolished or remodeled beyond recognition over the years, and still others remain hidden behind massive hedges and forbidding walls, several of Williams’ buildings simply watch over unassuming Los Angeles streets with a quiet dignity. We visited 10 of them.

The John Bishop Green residence looks stately and massive and clearly connotes wealth and success with its red brick and scalloped chimneys. It is hidden behind a low wall in a leafy neighborhood in Flintridge.

The Manuel and Anna Glickman house is one of the most modest Paul Revere Williams houses still standing, and a nice, cozy counterpoint to places like the John Bishop Green residence.

The Walter D.K. Gibson house looks straight out of a 1950s sitcom and sits neatly on the summit of a hill, tucked into a leafy yard. I had to climb up a low wall to get a peek of the modest, well-proportioned facade.

The Goodwin residence is neat and almost symmetrical. It’s a real-life dollhouse, with its wrought iron entryway and tidy yard with two giant trees.

The Robert Norman Williams residence in Ontario is one of the best surviving examples of Williams’ work in the Pomona Valley. Completed in 1948, it would’ve looked extremely contemporary through the 1970s.

The Bruce and Lula Blackburn residence looks like a bright villa built into the side of a hill. Its white stucco, red tile, and Spanish details lend it a particularly Californian sort of romance. It’s amazing that something so soft and expressive could’ve come from the same drawing board as the stern, angular lines of the Robert Norman Williams residence or the J. Phyromn Taylor house.

The Katherine B. Flint residence in Flintridge looks like the platonic ideal of a perfect American house, with its pristine exterior, formal columns, and extensive symmetry. It’s surrounded by a nice green lawn, and has a view of NASA’s Jet Propulsion Laboratory off in the distance.

The Gabriel Carlos and Mary McAllister Duque house looks shockingly contemporary and almost brand new—but its timeless beauty is all in the proportions, smooth lines, and a few super-sophisticated details.

The J. Phyromn Taylor house near Hancock Park looks like it belongs in Honolulu circa 1960 with its rock face, shutters, and vaguely Asian proportions: long overhangs and lots of long, horizontal lines.

Use the map below to visit these 10 homes, and find even more via HomeAdvisor. Please keep in mind that these are private residences, so be respectful and don’t trespass. 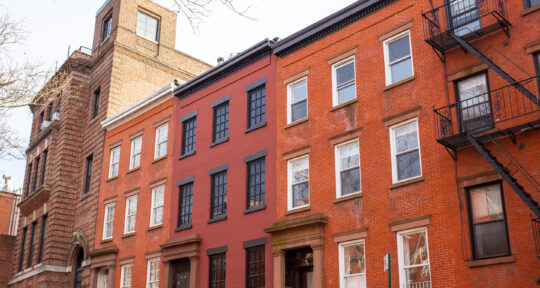