Staff picks: Add these Extraordinary Places to your next road trip

From dinosaurs in the California desert to the U.S. Capitol, here are some of our favorite stops that we just can't stop talking about

I would love to report that every museum, park, and historic home that I’ve visited through the years has been extraordinary—but every roadtripper knows that’s not always the case. I’ve traveled great distances and endured missteps and setbacks only to arrive at my destination and discover that it has closed (or has disappeared completely), been drastically altered, or is, for various reasons, simply underwhelming.

Yes, I firmly believe the traveler’s mantra that trips are about the journey, not the destination—and sometimes those detours or unexpected challenges make the best memories. But it’s also nice to receive recommendations from someone you trust; I have yet to go down an internet rabbit hole deep enough to provide travel tips as helpful or as motivating as when a trusted friend directs me to an attraction that I’ve never heard of and declares: “You have to go here!”

Earlier this year, I began a long distance relationship with a Michigander; I only knew her for a few months before she suggested we go to the Wacky Taxidermy and Miniatures Museum in Mackinaw City. The relationship didn’t last, but her recommendation was spot-on. Would I have visited the National Gallery of Art in the middle of the pandemic if a friend hadn’t offered me an extra ticket and insisted it was safe? Around the same time, another friend suggested that I absolutely needed to see the gallery’s four Thomas Cole paintings collectively known as “The Voyage of Life” in person—they were both right.

Sometimes, reading between the lines of a review (or ignoring it altogether) is equally helpful. While my dad and I were traveling Route 66 a few years ago, we listened patiently as several people warned us about Oklahoma’s resident redneck, Harley Russell. We understood why Russell’s use of “colorful language” may offend some people, but we went anyway. The time we spent at the Sandhills Curiosity Shop was indeed “Insanity at its finest,” as the hand painted sign above the door says—but it was also an undeniable highlight for both of us. (Years later, Russell has stayed in touch with my dad on Facebook, so I suspect he would say the same.)

While it’s entirely possible that one person’s travel treasure can be another’s trash, sharing insider tips with others is one of the best parts of returning from any road trip. For the Roadtrippers team, the lure of the road is constant and our travel bucket lists are infinite. Picking favorites is almost impossible but we’ve tried by curating a sortable list of Extraordinary Places to get you started. So whether you’re motivated by genuine wanderlust or the occasional case of FOMO, here are just some of the places that we love the most—that is, until we hit the road again and discover new favorites.

The cliche that “photos don’t do it justice” applies more to Grand Canyon National Park than anywhere else I’ve ever been. The scale of this natural wonder is difficult to get your mind around, even after seeing it in person.

I’ve lived my entire life in the Midwest, and somehow no one had ever told me how amazing it is to hike along the dunes above the Caribbean-blue water of Lake Michigan at Sleeping Bear Dunes National Lakeshore.

The American Sign Museum in Cincinnati, Ohio, has to be one of the most photogenic museums out there. Stop in to snap some great shots of the hundreds of signs displayed in the museum, from handmade wooden signs dating back to the early 20th century to gobs of glowing neon.

Seeing Frank Lloyd Wright’s Taliesin West emerge from Scottsdale, Arizona’s dry desert landscape is incredible in itself, but the tours and history here are just as cool. From the onsite architecture school to swanky theatre, you’ll leave with a newfound fascination with the architect’s life and legacy.

Located within minutes of bustling Waikiki is one of Hawaii’s most incredible natural wonders: Diamond Head State Monument. Bring plenty of water for this strenuous hike up the ancient crater and spend some time watching paragliders from the top.

Nothing beats a baseball game at Fenway Park, which is located right near Boston University’s campus and the Back Bay, smack dab in the middle of Boston. I may be biased, but it’s a quintessential summer experience—even if you aren’t in town for a game, take a historical tour of the park instead.

The thing that makes me happier than anything else in the world is encountering animals in the wild—and Yellowstone National Park did not disappoint. I’ve seen elk, moose, bison, pronghorn, prairie dogs, and even once had a somewhat harrowing encounter with a grizzly bear. Hiking the Lamar River Valley at dawn was one of the most incredible hikes I’ve ever taken—it’s absolutely humbling to be in the wild surrounded by so many incredible animals.

Walking Bourbon Street—along with most of New Orleans’ famed downtown and French Quarter—is like stepping out of a time machine (or traveling to another country). I love big brass jazz bands and there is no better place to stumble upon them than New Orleans.

Arizona’s Biosphere 2 is really cool. We took the tour and it was super interesting to hear the history, walk through the different biomes, and learn about why the project started and what they were trying to accomplish. The sci-fi nerd in me definitely was fantasizing the whole time about living within a closed environment on a harsh alien planet.

Colorado’s Garden of Gods is a great place to hike and climb. In addition to the amazing views and rock climbing opportunities, the park is right by Manitou Springs, which has a lot of amazing stuff to see and do, including an incline and annual coffin races.

Wyoming’s Devils Tower National Monument is just amazing and like nothing I’ve seen before or since.

The Outer Banks Scenic Byway along the North Carolina coast takes you past beautiful beaches and lighthouses—I have a lot of fun memories learning about pirates when I visited as a kid.

You can’t do much better in the roadside kitsch department than California’s Cabazon Dinosaurs. This must-do pit stop on the way from Los Angeles to Palm Springs features dozens of dinos (in addition to the two original icons Dinny and Mr. Rex) and a nice gift shop. Unfortunately the diner featured in Tim Burton’s classic Pee-wee’s Big Adventure has been demolished, but visitors can still climb into Mr. Rex’s mouth—just tell them Roadtrippers (and Large Marge) sent you.

After more than a year spent living in D.C., I still think the U.S. Capitol is one of the most beautiful buildings in the world. Even when it’s closed to visitors (because of COVID-19, security concerns, or otherwise), the large lawns have plenty of shady spots perfect for picnics or people watching—and if you’re visiting while Congress is in session you might just get to thank (or pressure) your Senator or Representative in person.

Cemeteries are great places to escape the tourist crowds and learn about an area’s local history. Cincinnati’s Spring Grove Cemetery (the third largest cemetery in the country) is also an arboretum with 733 acres populated with native and exotic flora including 27 state champion trees scattered among the mausoleums and monuments.

There’s no shortage of scenic and quirky stops along California’s Pacific Coast Highway, but my absolute favorite is Hearst Castle. This opulent display of over-the-top wealth, built by eccentric publishing tycoon William Randolph Hearst and architect Julia Morgan 100 years ago, has an incredibly interesting history. The hilltop castle is closed for the next few months due to roadway repairs, but I promise it’s worth the wait.

Speaking of eccentrics—Salvation Mountain is perhaps the ultimate bizarre roadside attraction. The brightly colored mound overlooks a remote, muted part of Southern California’s desert and was constructed by local character Leonard Knight. I love this part of the desert specifically because it’s packed with weird stuff like this. If you find yourself in the area, I recommend also checking out nearby Slab City and the International Banana Museum on the North Shore of the Salton Sea.

The Bonneville Salt Flats in Utah were calling my name long before I was even able to visit in person. It’s a place so vast and white that it appears otherworldly. It’s also the site of many historic land speed records. Having the opportunity to open up the throttle on my motorcycle and get momentarily lost in this glistening gearhead mecca is still one of my all-time road trip highlights. 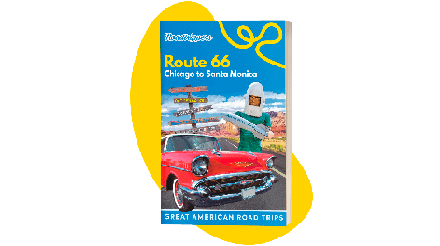 Buy the book
Get started